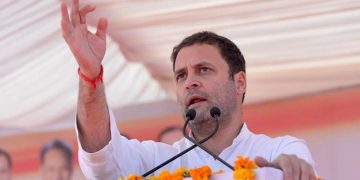 New Delhi, May 27 (India Today): The President of the  Congress party, Rahul Gandhi, has categorically said that the party will have to find a new chief as he won’t change his mind about stepping down from the post of the party chief, sources told NDTV. Mr Gandhi, who informed the party about his decision to quit following the party’s decimation in the Lok Sabha polls, has refused to meet the party’s newly-elected lawmakers who called on him. All his meetings and appointments have been cancelled, though he met two envoys from the party.

This morning, Mr Gandhi told senior Congress leaders Ahmed Patel and KC Venugopal that the party will have to find a new chief as his decision stands, sources told NDTV.

In a tweet this morning – his first since he announced his decision to quit — he paid tribute to former Prime Minister Jawaharlal Nehru – his great-grandfather – to mark his death anniversary.

Sources close to Rahul Gandhi said he is “not abandoning the post” even though he is determined to quit. He will give the party time to choose a new person for the top job.

Rahul Gandhi’s mother Sonia Gandhi and sister Priyanka Gandhi Vadra reportedly agree with his decision – they had initially tried to get him to change his mind – and acknowledge that the Congress “has to come to terms with the fact that there has to be a change of guard” and a total reset.

Sources also say Rahul Gandhi has not changed his mind, despite several Congress leaders pleading with him over the weekend and asking him to go for a full overhaul. Officially, the party told reporters on Saturday that Rahul Gandhi’s resignation offer had been “unanimously rejected”.

In a statement today, the Congress asked the media to “respect the sanctity” of the closed-door meeting of its working committee and “not fall into the trap of conjectures or speculations and await the calibrated efforts by the Congress party towards future course of action”.

on Saturday, Rahul Gandhi – roundly blamed for a disastrous campaign that made no difference to the BJP’s colossal victory — did some tough-talking, reminding party leaders that they had put their sons before the party and “pushed” for their candidature in the Lok Sabha polls.

Former minister P Chidambaram reportedly became emotional and said some supporters, especially from the south, could take the “extreme step” if he resigned.

Mr Gandhi reportedly made it clear that he would not “vanish” and would continue to work for the party. “It is not necessary that the president should be from Gandhi family,” sources quoted him as saying firmly. When Priyanka Gandhi’s name came up as an alternative, Mr Gandhi reportedly said: “Don’t drag my sister into it.”

In the starkest symbol of the Congress’s complete collapse in the election, Mr Gandhi also lost his traditional seat Amethi in Uttar Pradesh. He would not be in parliament had he not contested and won from Wayanad in Kerala.

The Congress was demolished in 17 states, including Rajasthan, Chhattisgarh and Madhya Pradesh, the states it won in December. The party also failed the test in Karnataka, another state it rules in alliance with HD Kumarasamy. Only in Punjab, where it has been in power since 2017, did Congress win eight of 13 seats. That too, in the backdrop of an unending feud between Navjot Sidhu and his boss, Chief Minister Amarinder Singh.

Mr Gandhi said he took “100 per cent” responsibility for the party’s failure and told the Congress Working Committee — which comprises 52 members — that he would like to exit as its top boss.

The Congress has mostly been led by members of the Nehru-Gandhi family except for several years after former Prime Minister Rajiv Gandhi (Rahul Gandhi’s father) was assassinated in 1991. The party did not do well under Sitaram Kesri and several leaders convinced Sonia Gandhi to take over.