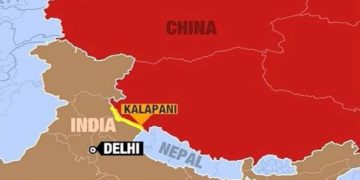 Despite COVID, India-Nepal border row takes a turn for the worse

Despite COVID, India-Nepal border row takes a turn for the worse Even in the midst of the COVID 19 invasion, which has affected both countries, India and Nepal are fighting over the Kalapani area in the tri-junction of India-Nepal and China. In a tit for tat move, Nepal is going to publish a map showing Kalapani and other disputed areas as part of its territory, after India produced a map showing the same areas as being part of India.

The Indo-Tibetan Border Police are already there establishing India’s claim. In fact, since the 1962 war with China, the Indians have been having an armed contingent in this area. The Nepalese have now sent their armed police to patrol the area and establish camps.

The matter is further complicated by the Indian army chief Gen.M.M.Naranvane’s thinly veiled hint that the Chinese are instigating Nepal to needle India on the Kalapani issue. Gen. Naravane’s remark stemmed from a meeting which the Nepalese Foreign Secretary Shanker Das Bairagi had had with the Chinese Ambassador Hou Yanqi in Kathmandu apparently to discuss the boundary row with India.

Earlier, India had made a great fuss about Pakistan’s holding elections in the disputed territory of Gilgit Baltistan. India claims Gilgit Baltistan because it was part of Jammu and Kashmir before Pakistan took it by force in 1947-48. The Indian objection embarrassed the Chinese because their US$ 60 billion China-Pakistan Economic Corridor (CPEC) enters Pakistan at Gilgit Baltistan.

When India built a road linking Dharchula in the Uttarakhand State of India to Lipulekh Pass in the Kalapani area on the India-China-Nepal tri-junction, Nepal strongly protested saying that the road passes through Kalapani over which it has had a claim for years. Nepal says that as per the 1816 Sugauli Treaty with the then British rulers of India, Lipulekh Pass in Kalapani belongs to Nepal.

But this is disputed by Nepal. In 2015, when Indian Prime Minister Narendra Modi and the Chinese President Xi Jinping agreed to build the Dharchula-Lipulekh Pass road, Nepal had protested. But to no avail. It protested again when the government of India produced a new India political map following the conversion of Jammu and Kashmir from a State into two Union Territories. The new political map showed Kalapani as being part of India.

Nepal had proposed Foreign Secretary-level talks on the Kalapani row. India said it would come for talks after the coronavirus is tackled. Nepal however wanted talks urgently as nationalistic and anti-India feelings were running high.

The strategically located Lipulekh Pass in Kalapani serves as an important vantage point for India to keep an eye on Chinese troop and civilian movements. But for Nepal it is both a strategic as well as a nationalistic issue.

“India thinks that it can do whatever it likes with its military might. India’s bullying attitude should not be tolerated, and if needed, Nepal should stand up to India and increase its army’s deployment in the disputed territory. What is the use of the 90,000-strong army, if Nepal cannot defend its territorial sovereignty?” asked Krishna Pokharel, Political Science Professor Krishna Pokharel of Tribhuvan University in an interview to South Asian Monitor.

The Nepalese government has now announced the issue of a new map of Nepal including the “encroached areas”. On May 16, unveiling the policies and programs of the Khadga Prasad Sharm Oli’s government, Nepalese President Bidya Devi Bhandari stated that a new map of Nepal will be produced in which the “encroached areas” Limpiyadhura, Lipulekh and Kalapani areas will be included.

Earlier Indian and Chinese troops had clashed in Naku La Pass on the Sikkim-India border. Soldiers on both sides suffered injuries. When China sent a helicopter to reconnoiter the area following the clash, India flew a jet fighter over it.

Even though both India and China officially downplayed the skirmish, claiming that both sides had over-reacted and that, generally, both nations are committed to maintaining tranquility on the border, those who read the tea leaves in Sino-Indian relations say that such incidents are symptoms of a larger conflict hidden from the public view.

However, for some time now, Pakistan has been slowly integrating Gilgit Baltistan into its formal set up partly to satisfy the Gigit Baltistan people and partly to control the area better, given the fact that CPEC enters Pakistan at Gilgit Baltistan. China would welcome any step to maintain peace in the area in view of its investment there. In this context, India’s objections to holding elections in Gilgit Baltistan for its legislature appeared jarring to both Pakistan and China.

But for India it is a question of its “sovereignty” over Gilgit Baltistan which it says is a part of Jammu and Kashmir.