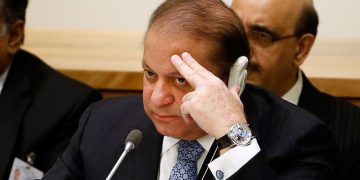 ‘Our desire for peace should not be interpreted as our weakness’, Sharif tells India

‘Our desire for peace should not be interpreted as our weakness’, Sharif tells India Pakistani Prime Minister Nawaz Sharif will raise the Kashmir issue at the UNGA loudly but Modi will not be there to listen.

Islamabad, Sept 29 (NIA) – Pakistan Prime Minister Nawaz Sharif on Wednesday strongly condemned the surgical strikes conducted by the Indian Army along the Line of Control and stated that Pakistan forces were ready to defend their country.

“We condemn this attack, our desire for peace should not be interpreted as our weakness,” Sharif said in a statement.

“We are ready for the safety and defence of our country,” he added.

Sharif further said that he strongly condemned the ‘unprovoked and naked aggression’ of Indian forces resulting in martyrdom of two Pakistan soldiers along the Line of Control.

Tension has been escalating between the two nations after 19 Indian soldiers were killed in a terror attack at an Army camp in Uri in Indian controlled Kashmir earlier this month.

India has blamed Pakistan and accused it of being a ‘terror state’ while Pakistan had denied the accusations.

He said the army is closely watching the latest developments in the region and their impact on national security and expressed satisfaction over the operational preparedness of the Pakistan Army.