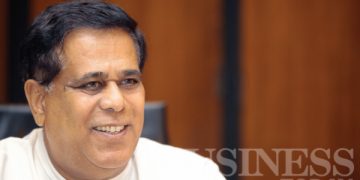 Colombo, February 16 (newsin.asia): Dark horse Nimal Sripala de Silva of the Sri Lanka Freedom Party/United Peoples’ Freedom Alliance has emerged to be the SLFP-UPFA candidate  for the post of Prime Minister of Sri Lanka, it is reliably learnt. He is aiming to take the place of incumbent Prime Minister  Ranil Wickremesinghe of the United National Party (UNP).

Wickremesinghe has confirmed that he remains in the race though it was rumored earlier in the day, that the party might ditch him and opt for another politically down to earth leader before it faces the next parliamentary elections in August 2020. By all accounts he has the backing of his outfit now.

Thus Sri Lankan politics is set to see a battle royal between the SLFP-UPFA on the one hand and the UNP on the other, over the Premiership, indeed over the government itself.

The party,which was partially against him, has now rallied behind him as he has promised to change its policies to make it people oriented and to make it more hospitable to younger leaders so that a second tier leadership is built up.

Wickremesinghe said that he is ready to carry on with the present coalition with President Sirisena’s SLFP/UPFA but if the latter were to  break the alliance, the UNP would form a government on its own as it can muster the numbers. It needs only seven more MPs to get a simple majority but the SLFP/UPFA needs 17, a tall order.

Sri Lanka is presently being government by a coalition in which the principal members are the SLFP and UNP, with SLFP leader Maithripala Sirisena being President and the UNP     chief Wickremesinghe being Prime Minister.

But the two leaders and their parties are estranged following their defeat at the hands of the Sri Lanka Podujana Peramuna (SLPP) led by former President Mahinda Rajapaksa.

The estrangement has led to doubts about the continuance of the alliance, with both parties wanting to form a government without the other in it.

Earlier, the UPFA had proposed Nimal Sripala de Silva’s name.  And President Maithripala Sirisena had proposed Speaker Karu Jayasuriya for the premiership in place of the unpopular Wickremesinghe.

But the UNP rejected both suggestions saying,  come what may, Wickremesinghe will continue to be Prime Minister.

Meanwhile, the SLFP/UPFA was feeling strongly that if it  combines with SLPP (which is called the Joint Opposition in parliament) it can make a bid for power without the UNP, it  approached  Mahinda Rajapaksa for support.  Nimal Sripala de Silva was put as the possible candidate for Premiership.

The SLPP said that it would support if both Wickremesinghe and UNP are ejected and an SLFP/UPFA government is formed. But it would not join the government as such. It would give support from outside on merits.

The SLFP/UPFA has to get 113 MPs to give it simple majority in the House of 225. But at the moment, even in combination with the Joint Opposition, it has only 96. It has to get 17 more to reach 113.

The SLFP/UPFA is still hoping to rope in 17  from the UNP or UNF, the latter being the alliance led by the UNP. The UNF has some Muslim parties which will definitely join as they always join the government, irrespective of their electoral alliances.

The UPFA/SLFP believes that the UNP is now divided on  Wickremesinghe with many in the UNP thinking that their leader had spoiled the name of the party and hurt its electoral chances by being associated with the LKR 11.4 billion Central Bond scam. There may be some who might be enticed by ministerial positions.

But this option is closed now. A former UNP rebel Sujeewa Senasinghe said the party has rallied round Wickremesinghe.

Meanwhile, President Sirisena is believed to be consulting the Attorney General about whether he can replace Wickremesinghe and install Nimal Sripala de Silva in his place.

As per the 19 th.Amendment of the constitution, the President cannot replace the Prime Minister. Once appointed he remains PM so long as he enjoys the confidence of the House and his party.

But if the UPFA/SLFP musters 113 plus, it could move and pass a motion of no confidence against Wickremesinghe.

The challenge before the UPFA/SLFP now is to muster 113 MPs at the least .It is said to be conducting a signature campaign among MPs.

(The featured image at the top shows Nimal Sripala de Silva, who is being put up as the SLFP/UPFA candidate for the Premiership of Sri Lanka in place of Ranil Wickremesinghe of UNP)