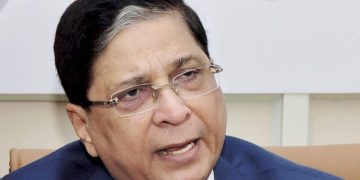 New Delhi, January 16 (newsin.asia): The crisis in the Indian Supreme Court which began last week, appeared to have blown over by the weekend thanks to the efforts of mediators. But the widespread expectation of an amicable solution to the conflict between Chief Justice Dipak Misra and four senior judges was belied the very  next week, on Monday.

The Chief Justice, who had earlier broken down at a reconciliation meeting with the rebel judges and had to be helped to go into his  chamber, came back on Monday only to resume the fight.

He kept the four rebel judges out of the benches he  named to hear important cases. By doing so he reiterated his case that he has the sole authority to determine the bench for cases, a claim strongly contested by the rebel judges. The judges had complained that Misra has been misusing and abusing the power to assign cases to benches.

Even as one of the rebel judges said that there was no resolution of the conflict, senior lawyer Prashant Bhushan filed a complaint saying that the medical college admission scam should be re-examined and in that context demanded that the role of the Chief Justice Misra be probed.

On Monday, the Supreme Court Monday put out a list of seven cases which will be heard by a Constitution Bench starting January 18. Not one of the four rebel judges — Justices J Chelameswar, Ranjan Gogoi, Madan B Lokur and Kurian Joseph — figured in this Bench, Indian Express reported.

The Constitution Bench, which was formed earlier to hear the challenge to “Aaadhar” (Unique ID card), comprises CJI Misra and Justices A K Sikri, A M Khanwilkar, D Y Chandrachud and Ashok Bhushan.

It will now take up for hearing the challenge to criminalization of homosexuality (the Section 377 case); restrictions on entry of women into the Sabarimala temple; the question raised by a Parsi woman that bars her entry into a fire temple because she had married outside her religion; a petition challenging the adultery provision in the Indian Penal Code which says a woman cannot be punished for adultery, and only the man can be; and a petition on whether legislators facing criminal cases should be disqualified at the stage of charges being framed against them. The sixth petition before the Bench concerns taxation while the seventh deals with consumer law.

Two petitions demanding an independent probe into the 2014 death of CBI Special Judge B H Loya will also come up before a bench of Justices Arun Mishra and Mohan M Shantanagoudar on Tuesday.

The matter was listed for Monday but was moved to Tuesday since Justice Shantanagoudar was not available.

Last Friday, the four senior judges, who held a press conference, had said they had raised the question of allocation of the Loya case with the Chief Justice when they met him earlier that morning. Against objections, the Chief Justice had admitted the Loya case, brushing aside the fact that the Bombay High Court was already seized of the matter.

The Loya case involved the Bharatiya Janata Party (BJP) President Amit Shah. Shah, the second most powerful man in India after Prime Minister Narendra Modi, was discharged from the case after the “mysterious” death of Judge Loya who was hearing the case.

Meanwhile the Indian Express reported that senior lawyer Prashant Bhushan had filed a complaint in the Supreme Court in which he said that the Chief Justice should be investigated for his alleged role in the Lucknow medical college bribary case.

Two  months ago, Bhushan and Chief Justice Misra had locked horns in the court after Bhushan demanded that the CJI recuse himself from the Lucknow medical college graft case. The CJI refused to do so and Bhushan had stormed out of the court.

“Now Bhushan is back with a new complaint against the CJI in the same case and has sent copies of it to the four rebel judges, Justices J Chelameswar, R Gogoi, K Joseph and M B Lokur. A copy of the complaint was also sent to Justice A K Sikri,” the paper said.

Signed by Bhushan, as Convenor of the “Campaign for Judicial Accountability and Reforms”, the complaint calls for an inquiry against the Chief Justice by either three or five senior Supreme Court Judges for what are described as “various allegations of misconduct.”

“The CBI FIR makes allegations that the entire conspiracy and planning was to bribe and influence apex court judges who are dealing with the case of Prasad Medical Trust. This Bench was clearly headed by Chief Justice Dipak Misra. In these circumstances, he was an interested party and could not have dealt with this case either on the judicial side or the administrative side by way of assigning a particular Bench to hear this case.”

“While at this stage there may not be conclusive evidence of Justice Dipak Misra’s involvement, the circumstances listed definitely warrant a thorough investigation,” the petition said.

The 24-page complaint (with 100 pages of annexures) concluded saying: “The above-mentioned matters have tarnished the reputation of the court and have brought the judiciary into disrepute. It is a matter which needs to be swiftly dealt with.”

The complaint has been filed under the “in-house” procedure for investigating complaints against judges of the High Courts and the Supreme Court.

Annexed in Bhushan’s complaint are transcripts of conversations of September 2017 purportedly recorded by the Central Bureau of Investigation (CBI) in connection with the Medical Council of India (MCI) bribery scam for which the agency had registered a First Information Report (FIR) on September 19, 2017.

The tapped conversations are purportedly between I M Quddusi, a retired Judge of the Orissa High Court who has been arrested by the CBI; Viswanath Agarwala, a middleman, and BP Yadav of the Prasad Education Trust, the institution which was barred by the MCI from admitting medical students and subsequently appealed before the Allahabad High Court and Supreme Court.

The transcript has references to alleged payoffs.

“In the light of the convoluted course that the case followed and in the light of these tapped telephonic conversations, this matter needs an independent investigation to ascertain the veracity of the claims being made in the conversations, of the plans to allegedly pay bribes to procure a favorable order in the case, and to clear the doubt about the role of the present Chief Justice of India,” Bhushan’s complaint said.

(The featured image at the top is that of Dipak Misra, the beleaguered Chief Justice of India)