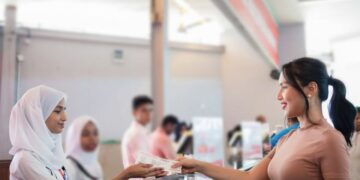 A vistor checking in at a Maldives hotel. Photo: MVHotels

Male, May 3 (Maldives Financial Review): India is currently going through “COVID-hell,” with daily new cases numbering in the 300,000s. On 26 April 2021 it officially reported more than 2,700 deaths, a number that’s suspected to be higher. As the country struggles to come to grips with a deadly second wave, one which it appears to have not been prepared to tackle, there are reports of people dying on the streets and outside hospitals — the sheer numbers of those infected have left patients without access to oxygen and other medical interventions.

The Modi Government has also announced an extension of its ban on international passenger flights until the end of April. Meanwhile countries like Canada, Singapore, Australia, New Zealand and the US have banned flights from India, enacting restrictions and travel advisories, citing the rapidly increase in numbers.

How will this impact the Maldives?

The travel bubble between India and the Maldives, established in September 2020, allowed a limited number of airlines to operate between the two countries. The Maldives’ tourism industry, where Chinese tourists had earlier accounted for the highest market share, pivoted sharply to Bollywood stars to promote the exclusive holiday destination — through Instagram and various other social media platforms. The strategy worked; with arrivals from India accounting for 25.7 percent in February 2021, a 60 percent increase over arrivals in January. As of 21 April 2021, India was the number one market for Maldives tourism, accounting for 22.8 percent of the total market, with Russia following closely at 21.6 percent and other markets such as the Ukraine and Germany in mere single digits.

However, effective 27 April 2021, citing the situation in India, the Maldives’ Ministry of Tourism announced that tourists travelling from India will no longer be able to stay at tourist facilities on inhabited islands, meaning guesthouses and city hotels. However, travellers from India can still stay at resort islands. This is a major revenue blow to the guesthouse industry where industry experts have observed that up to 90 percent of occupancy was from India.

Although the Maldives had reopened borders on 15 July 2020, guesthouses, located in inhabited islands, were allowed to re-open on 15 October 2020. Guesthouses in the Greater Malé Region were only allowed to re-open on 14 December 2020. According to the Ministry’s statistics, there were 350 guesthouses, with a total bed capacity of 6,530, operational as of end-February 2021. This increased to 414 establishments — a total capacity of 7,556 — by 25 April 2021.

The ban on Indian tourists from staying at guesthouses will have a large impact on island economies, especially islands such as Kaafu Maafushi, where the local economy is highly dependent on guesthouse tourism.

It is a delicate balance however; the island has reported a high number of new COVID-19 cases recently, with its Health Centre recording 214 positive cases by 27 April. Maafushi was placed under monitoring on 20 April 2021 with a number of positive cases identified. It is not possible to ascertain whether the high number of cases are linked to the number if Indian tourists vacationing in the island, since the Health Protection Agency has not published this level of data.

Looking at COVID-19 statistics for the Maldives, cases in the last week of April have been as high as 386 in a day; with 198, in the same day, reported from islands other than in the Greater Malé Region.

Herein lies the challenge. Does the country immediately prioritise its economy, and people’s livelihoods, or people’s lives? Does the Maldives, given that the pandemic is still raging across the world one year on, have a viable choice?

Certainly there are seemingly a lot of hard choices to make, but the Maldives needs to make them sooner rather than later. While this current global situation was not of the nation’s making, the current administration, and industry stakeholders, should be looking ahead at ways to minimise the economic fallout.

The fledgling guesthouse trade needs more consideration and active assistance than perhaps resorts and other tourism mega-brands. This might be as good a time as any for dialogue, consideration and action with a view to protecting lives now and creating a viable path, through policies tailored to the guesthouse trade, to fast-tracked industry revitalisation and future economic growth.