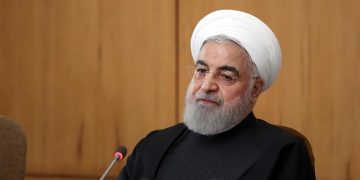 Colombo, January 16 (South Asian Monitor): War clouds over the Middle East have not disappeared yet. According to Al Jazeera, Iranian President Hassan Rouhani told foreign powers to withdraw their forces from the Middle East, warning they “may be in danger” if they remain in the region.

“Today, the American soldier is in danger, tomorrow the European soldier could be in danger,” Hassan Rouhani said in televised remarks on Wednesday, without elaborating.

Rouhani’s comments mark the first time he has threatened European countries amid heightened tensions with the United States. Meanwhile, The President Donald Trump’s Administration threatened to impose a 25 percent tariff on European automobile imports if the UK, France, and Germany did not formally accuse Iran of violating a 2015 nuclear deal, the Washington Post reported on Wednesday. In a statement, the three countries said that they still want the deal to succeed and that they were not joining a “maximum pressure” campaign against Iran by the US. The US abandoned the deal in 2018 and has re-imposed sanctions, Al Jazeera said.

But war or tension in the Middle East would have very adverse consequences for the countries of South Asia, which depend on oil from that area and where millions of their people work and send back billions of dollars as remittances to sustain home economies.

To take Bangladesh first, that country depends heavily on workers’ remittances and oil from West Asia. And the US is one of Bangladesh’s largest markets. Immediately after news came about the Iranian missile strikes on US bases in Iraq, international benchmark Brent crude climbed more than 4%, reaching   US$ 71.75 per barrel, its highest value since September. In Bangladesh, the retail price of liquefied petroleum gas immediately increased by 20% as a result.

The magnitude of the possible oil crisis could be gauged from the fact that even the present value of oil imports into Bangladesh is a high US$ 65 billion a year. A hike in oil prices in the local market will mean increases in the prices of all commodities due to higher transport costs.

The US imports Ready Made Garments (RMG) from Bangladesh worth more than US$ 6 billion. War would necessarily mean a shrinkage of this lucrative market, and the impoverishment of Bangladeshi garment workers who are mostly girls from poor rural families.

Out of the over US$ 40 billion export earnings of Bangladesh, U$ 34 billion comes from RMG exports. Therefore, any shrinkage of RMG exports would badly impact on foreign currency reserves. And an increase in shipping insurance due to war would hike shipping costs.

The Middle East is the largest overseas job market for Bangladeshis. It  employs around six million Bangladeshis who had sent home some 60%  of the US$ 15.5 billion the country received in remittances in 2019. If Bangladeshis lose jobs because of the war or tension, there will be a fall in remittances too.

lf war between Iran and the US had actually broken out, India would have been asked by the US to permit the American military to operate out of Indian air force and army bases along the border with Pakistan under the Logistics Exchange Memorandum of Agreement (LEMOA) between the two countries.

In the recent India-US summit involving the Foreign and Defense ministers of the two countries, the US side had expressed eagerness to activate LEMOA.  With Asian Islamic countries, including Pakistan, unwilling to be any part of any America-led military action in the region, the US would have been constrained to seek Indian cooperation.

India’s US-friendly Prime Minister Narendra Modi would then have been on the horns of a dilemma. While wanting to help his friend Trump, he would have to face heavy flak at home where he is no longer seen as a messiah or a harbinger of economic development. Under his watch since 2014, industrial production has fallen. The agriculture sector is in dire straits with debt-ridden farmers committing suicide. Unemployment has soared as businesses are closing down or downsizing.

Because of US sanctions on Iranian oil, India had had to import oil from the US and Saudi Arabia at a higher cost. Iran wanted to sell more than 500,000 barrels per day (BPD) to India and had offered near free shipping and an extended credit period. But Prime Minister Modi chickened out under threat of US sanctions.

Iran had emerged as the single largest importer of Indian tea, taking over 50 million kg in 2019 , which is about 10% India’s total tea exports. The development of Chabahar port in Iran which India had undertaken to do (to get access to Central Asia avoiding Pakistan) would be been further hampered in case of war.

Remittances, mostly from the Middle East, account for much of India’s foreign exchange earnings. India recorded US$ 80 billion in remittances in 2018 and took the first place in the world in this category  China came second with US$ 67 billion, followed by Mexico and the Philippines with U$ 34 billion each, and Egypt with US$ 26 billion. War or tension would seriously affect remittances.

Having reaped the horrible consequences of siding with the US in the latter’s war against the Soviets and the Taliban in Afghanistan, Pakistan is naturally wary about getting into a similar situation now.

“We’re clear that Pakistan’s soil will not be used against any other state, and nor will Pakistan become a part of this regional conflict,” Foreign Minister Shah Mehmood Qureshi told parliament.

Pakistan is grappling with a severe economic crisis and is surviving with IMF bailouts and Saudi largesse. War in the region with its indirect involvement will not allow Pakistan to get out of the economic mire.

At US$ 19.3 billion, Pakistan ranks fifth in the world that receives the most remittances every year and much of it comes from the unstable Middle East.

Pakistan is also worried that any armed conflict with Iran will affect the peace process in Afghanistan where the US will find it harder to make a deal with the Taliban, which is a Pakistani ally.

But this plan will go up in smoke in Chabahar is flattened in a US-Iran war.  President Ghani is also aware that in the event of war, Iran could use its proxy, the Fatemiyoun Brigade, against his regime.

Sri Lanka has traditionally had good relations with Iran, whose oil experts helped it build its only refinery at Sapugaskanda. It is designed to use Iranian crude. US sanctions against Iran had put the Sapugaskanda refinery in trouble. Like India, Sri Lanka is also buying oil from non-Iranian sources at a higher price.

Retail prices of oil prices are kept low in Sri Lanka to keep down prices of commodities. But this keeps the state-owned oil importer and distributor, Ceypetco, in deep and perpetual debt to the government.