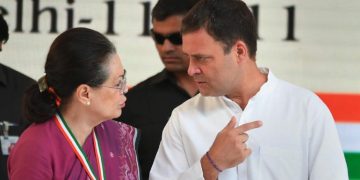 In the 55-page document, the party highlighted that job creation, addressing farmers’ distress, bringing a single moderate GST rate and giving Rs 72,000 per annum to 20 percent of India’s poorest families would be its key focus if voted to power.

The Congress also promised to come out with separate budget for farmers, fill up 22 lakh vacancies in government jobs, allocate 6 percent of the GDP to education, bring 50 more days of guaranteed jobs from the current 100 under MNREGA, boost healthcare infrastructure and enhance women’s safety.

“When we started a year ago, I made it clear that nothing in this can be a lie because we live in a time when we hear a large number of lies every day,” Rahul said, after releasing the Congress manifest0.

The document, titled Hum Nibhayenge, touched upon a range of other key issues, including national security, the situation in Jammu and Kashmir and the North East, foreign policy, defence, state of the rural economy, the current tax regime and environmental challenges, among other concerns.
The Hindu’s View On The Manifesto:
The Congress party in its manifesto pledges to follow a ‘wealth and welfare’ approach if voted back to power. In an attempt to appeal to the poor without scaring away the rich, it promises to create wealth through promotion of private enterprise and expand welfare for the vulnerable sections of society at an unprecedented scale. An ambitious minimum income guarantee scheme is to directly transfer ₹6,000 a month to the poorest 20% households. The National Rural Employment Guarantee Scheme, introduced by the Congress-led United Progressive Alliance government in 2005, is to be expanded to ensure employment for 150 days instead of the 100 days now. The promised expansion of health care, education and housing has attracted a lot of public attention, but equally eye-catching is the manifesto’s approach to several other critical questions of public policy. While welfare schemes are an attempt by the Congress to reconstruct its lost public support on the basis of a renewed development agenda, the manifesto tries to address many current questions that impact Indian democracy. Defamation will only be a civil offence; provisions for charging people for sedition will be removed from the Indian Penal Code; and the Armed Forces (Special Powers) Act will be amended to address human rights concerns. The party promises to expand reservations to private educational institutions, an unfinished component of UPA-I’s agenda of OBC reservations in educational institutions. Congress leaders stress that this manifesto addresses the needs and aspirations of the marginalised sections of society.

Election manifestos are important for political discussions ahead of elections, and for understanding the direction different political parties propose for the country. However, it must be kept in mind that parties overpromise ahead of elections, and the Congress must explain why it must not face that scepticism. Its manifesto has scant details about how its ambitious schemes will be funded. It is true that the Congress did deliver on many of the promises it made in 2004, though not entirely and to the full extent. Nonetheless, the Congress will do well to address follow-up questions on its schemes and their implementation. The manifesto has triggered a national debate on several issues that are close to people’s lives, and that is a welcome development. It has also prompted a fresh round of debate on broader topics such as India’s development path, the potential and limits of welfare and questions of fiscal discipline and revenue extraction. The Bharatiya Janata Party should join this debate on the merit in the Congress’s promises rather than use this as yet another opportunity to question the patriotism of its opponents. Details are inadequate, but the direction envisioned in the manifesto is encouraging.