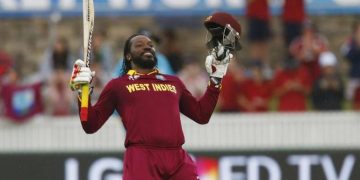 by Editor
in Around The World, Football, Sports, World
Reading Time: 2 mins read
3 0 April 25 (India Today) – Chris Gayle and Andre Russell were among 15 players in the West Indies squad for the 2019 Cricket World Cup named on Wednesday. Jason Holder, the all-rounder, will lead West Indies as they seek to win a World Cup for the first time since 1979.

Chris Gayle is 39 but he has been in spectacular form for Kings XI Punjab in the 2019 Indian Premier League. He has scored 444 runs including 4 fifties from 10 matches at a strike-rate of 162.04. Andre Russell has hit 392 runs for Kolkata Knight Riders in the 2019 IPL and has the highest strike-rate this season: 217.77.

“Based on the new selection policy approach which allowed us to consider a number of players that have not regularly appeared in the side over the last two years, we had a wide base of talent from which to choose,” interim chairman of the Cricket West Indies selection panel Robert Haynes said.

Haynes noted that off-spinner Sunil Narine and emerging fast bowler Alzarri Joseph were not considered, due to finger and shoulder injuries, respectively.

“There were a number of tough calls we had to make to settle on our squad of 15, including ensuring there was some continuity in the side, but we believe we have chosen a strong squad of players taking into consideration such factors as experience, fitness, team balance, current form and conditions.”

“In keeping with tournament regulations, we submitted our squad prior to the deadline date of yesterday. All players named for the Tri-Nations Series could, however, stake a claim to be in the final 15-member squad that will be submitted after the Tri-Series and before the final deadline next month.”

Gayle will be making a record fifth World Cup appearance for West Indies and needs just 253 runs to overtake fellow left-hander Brian Lara and become the leading batsman for the Caribbean side in One-day Internationals. The self-proclaimed, “Universe Boss” is the headline act of a batting line-up capable of changing the complexion of any game with enterprising stroke-play.

“To have a player the calibre of Chris in the side to lead the batting with his vast experience and his ability to play match-winning or game-changing innings is a blessing for us and the motivation of becoming the leading scorer for West Indies in ODIs is something which I think he will relish,” said Haynes.

“Looking at the condition of pitches in ODIs over the last few years in England and Wales, it appears that big totals will be the order of the day, so we believe we have a line-up that can put big totals on the board or chase them, as we have seen from recent matches.

“With players like the captain, Jason Holder, as well as Andre Russell in the lower middle-order, we believe we have good depth to our batting which will allow us to play the brand of cricket that will give us the best of chance of winning the World Cup.”