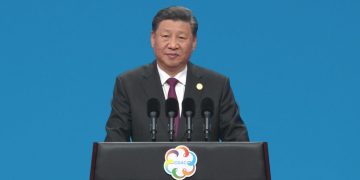 Beijing. May 15 (CGTN): Chinese President Xi Jinping has said that economic development is necessary to sustain Asian civilizations which have a hoary past. In his opening oration at the Dialogue on Asian Civilizations here on Wednesday, Xi further said that no civilization is superior to another and willfully reshaping or replacing a civilization would be disastrous.

President Xi underscored the importance of mutual respect and equal treatment among civilizations.

Representatives from 47 Asian and other invited countries are participating in the event, which is themed “Exchanges and Mutual Learning among Asian Civilizations and a Community with a Shared Future.”

Asia is home to one of the earliest human settlements and is an important cradle of human civilization, Xi said.

This vast and beautiful continent covers a third of the total land on Earth, has two-thirds of the world population, and consists of 47 countries and more than 1,000 ethnic groups, Xi said.

Asian people have made incredible cultural achievements over the past thousands of years and they have started cultural exchanges and mutual learning since the early days, he said.

Xi cited the ancient trade routes that helped spread silk, tea, ceramics, spices, paintings and sculptures all over Asian countries as examples of such early exchanges.

“These are records of the inter-civilizational dialogue among Asian ancestors,” Xi noted.

The modern-day Belt and Road Initiative (BRI) is built on these channels for exchange and mutual learning, and Asian civilizations have grown stronger thanks to such interactions, Xi also said.

President Xi noted that maintaining peace is a shared responsibility for every country.

Without peace, constant conflicts and fierce wars would break out, and then economic growth, improvement of people’s livelihood, social stability and people-to-people exchanges would all become empty talk, Xi said.

The Chinese president also pointed out economic development is a strong support for the survival of civilizations and prosperity is an important cornerstone for the country’s progress.

Asian people hope that all countries will jointly promote economic globalization that is open, inclusive, balanced and beneficial to all; work together to eliminate poverty and backwardness in some countries; create a carefree life for children and bring happiness and joy into every family, Xi added.

opening of the Conference on Dialogue of Asian Civilizations in Beijing, May 15, 2019. /CGTN Photo

He also said if countries are completely isolated from each other, human civilizations will lose it vitality.

Xi urged Asian people to keep away from isolation, be open-minded and build a community with a shared future for Asia and mankind.

President Xi asked countries to create conditions for other civilizations to develop while keeping their own vibrant.

“We should leave various civilizations in the world all in full blossom,” Xi said.

There would be no clash of civilizations as long as people are able to appreciate the beauty of them all, Xi added.

The Olympic Tower is illuminated in various colors before the upcoming Conference on Dialogue of Asian Civilizations in Beijing, May 14, 2019. /Xinhua Photo

Xi also stressed the need to ensure the openness, inclusiveness and mutual learning among civilizations.

Exchanges and mutual learning among civilizations should be conducted in a reciprocal and equal manner, and be diversified and multi-directional, Xi said, noting they should not be compulsory or forced, or be a one-way flow.

China is willing to implement an Asia tourism promotion plan with other countries, Xi continued.

In the future, China will embrace the world with a more open attitude and contribute to the world with more vigorous civilization achievements, Xi concluded at the end of his speech.