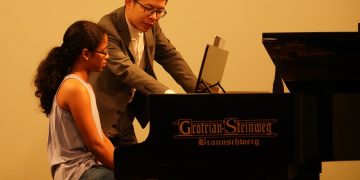 When Lu Yao, an award-winning graduate of the Beijing-based Central Conservatory of Music, walked on to the stage of the Lionel Wendt Theatre at the city center of capital Colombo, “Some audiences were taken aback by his boyish appearance,” De Saram said.

Lu’s masterful interpretation of classics by Chopin, Mozart and Beethoven revealed a maturity and depth, and quickly drew the audience into his world. His explosive duet with host CMSC was described as “inspirational” by De Saram, and a moment for artists from two civilized friends to display their musical prowess.

“A performance by someone as skilled as (Lu) Yao is something many Sri Lankans have never experienced,” said De Saram. Describing the Chinese musician’s interpretation of Pi-Huang by Zhang Zhao, a Peking Opera classic, De Saram said, “brings out all the elements of Chinese Opera through a single instrument.”

De Saram said that he is grateful for the sponsorship from the Embassy of the People’s Republic of China to Sri Lanka which enabled the CMSC to host Lu for a cultural exchange in Sri Lanka.

Nineteen-year old Avishka Wikramanayake, an audience and budding pianist himself, praised Lu’s performance. “It was both intimidating and inspiring to watch (Lu) Yao perform and dance on the edge of the abyss with every track,” he said.

The day after the recital, Wickramanayake was one of around 20 pre-selected advanced students participating in a free-of-charge master-class led by Lu.

Lu watched closely as Wickramanayake practiced a piece by Chopin. When he said, “Stop,” the entire class held its breath. Lu’s interventions were firm but constructive. “Don’t be nervous,” he said. Wickramanayake’s next attempt at the piece was audibly augmented by Lu’s instruction.

For Wickramanayake, who hopes to study musicology some day, a one-on-one with Lu was a once-in-a-lifetime experience. “It is great to interact with someone of that level of experience who makes you push yourself and aspire to be better,” he said.

Performing in Colombo was a new experience for Lu, who was visiting Sri Lanka for the first time and is more used to performing for audiences in China and the West. “I think the Sri Lankan audience was unbelievable and better than a lot of those in Europe,” he said.

“I am happy and honored to have played alongside the Chamber Music Society of Colombo who are at a very high level,” he added.

Lu had always wanted to visit Sri Lanka and try out the country’s famous tea, having heard many stories of his piano instructor’s travels to the scenic island. “In China, many musicians want the opportunity to visit places like Sri Lanka and share our culture,” said Lu.

“I hope more Chinese organizations sponsor cultural events like this and I hope I can come back as soon as possible.”