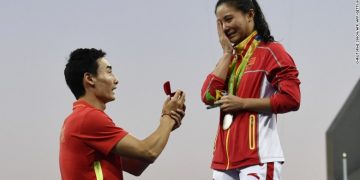 Chinese diver wins Olympic Silver, then gets proposed on podium

Chinese diver wins Olympic Silver, then gets proposed on podium China's He Zi was caught off guard by her boyfriend's dramatic proposal Sunday. AFP-Getty Images

Aug 15 – There are dramatic marriage proposals – and then there’s proposing during the biggest sporting competition in the world.

Chinese diver He Zi had just received a silver medal for the women’s three-metre springboard at the Rio Olympics on Sunday.

But she ended up with another prize when her boyfriend Qin Kai, in front of a global TV audience, went down on one knee.

Luckily for Qin, who himself won bronze in the men’s three-metre synchronised springboard last week, He Zi said yes.

“We’ve been dating for six years, but I didn’t expect him to propose today,” she said. “He said a lot of things, made a lot of promises, but I think the thing that touched me the most is I think this is the guy I can trust for the rest of my life.”

But some viewers have suggested that his shock proposal stole the limelight from her other precious metal, her Olympic medal.

Qin, a bronze medalist in the men’s synchronized 3-meter springboard, also gave his wife-to-be a red rose encased in glass.

But there was no ring on that occasion, as Enya used a gold ribbon to tie around Cerullo’s finger.
“The Olympic Games can look like closure but, for me, it’s starting a new life with someone,”Enya told the BBC. “I wanted to show people that love wins.”

-With Inputs from BBC and CNN