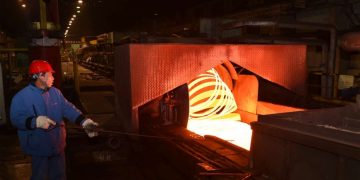 Taiyuan, China, January 11, (Xinhua): Imagine folding a piece of A4-sized paper into a little paper airplane. You throw the paper plane and it flies in the air smoothly for several meters.

Now imagine the “paper” is made of steel.

That is exactly what Zhang Wanquan did in a factory of a subsidiary of Taiyuan Iron and Steel (Group) Co., Ltd. in Taiyuan, capital of north China’s Shanxi Province.

Zhang said his company has developed an extremely thin type of stainless steel.

“This is interesting because stainless steel is usually much heavier than paper,” Zhang said as he folded the “paper plane.”

The steel is only 0.02 mm thick, or a quarter of an A4 paper’s thickness. The company claims that it is the only one in the world able to produce stainless steel 0.02 mm thick and 600 mm wide. The steel, which can be torn apart as easily as paper, can be widely applied in areas such as space and aviation, automobiles and computers.

“Our technicians spent two years in research and conducted 711 experiments before we were able to make it,” Zhang said. “Mass production began in the latter half of last year.”

However, the production of such paper-thin steel is limited. Currently, the company churns out 24,000 tonnes of such steel, which has been exported to the United States, Germany, Brazil and Turkey.

The steel has fetched high prices, with one piece of steel about the size of A4 paper selling for as much as 400 yuan (59 U.S. dollars), Zhang said.