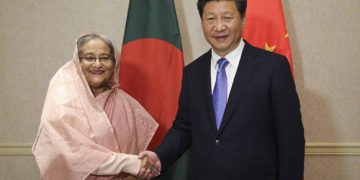 Dhaka, October 15 (NIA): China has pledged loans amounting to US $24 billion to Bangladesh during President Xi Jinping’s visit to Dhaka on Friday. With this, China takes a big leap forward in economically capturing Bangladesh which, at least under Prime Minister Sheikh Hasina, is considered to be under the Indian sphere of influence.

What Xi has pledged is Bangladesh’s biggest foreign credit line to date that will help it build power plants, a seaport and railways, Reuters reports.

India, on the other hand, had pledged only US$ 2 billion. Japan, helped by India, has also got involved in Bangladesh, offering finance at low interest rates to build a port and power complex, sharpening competition for influence in the country of 160 million people.

China plans to finance around 25 projects, including a 1,320 MW power plant, and is also keen to build a deep sea port at Sonadia. Among other projects are highways and information technology development.

According to Reuters , China’s Jiangsu Etern Co Ltd signed a deal worth $1.1 billion to strengthen the power grid network in Bangladesh.

The mega deals with Bangladesh will help strengthen the hands of the Chinese President when he meets the Indian Prime Minister Narendra Modi in Goa at the BRICS summit between October 15 and 16.

However China denies that it is in competition with India in Bangladesh. As in Sri Lanka, China is ready to collaborate with Indian firms in projects in Bangladesh, Chinese officials point out.

Zhao Gancheng, Director of South Asia Studies at Shanghai Institute for International Studies, told Reuters that both India and China support development in Bangladesh, and that it does not have to be one or the other.

“I really don’t think there is a zero sum game going on in Bangladesh between China and India. Bangladesh welcomes both Chinese and Indian investment,” Zhao said.

Bangladesh has backed Xi’s “One Belt, One Road” initiative to boost trade and transport links across Asia and into Europe, seeing it as an opportunity to lift growth all over the route.

Beijing had proposed an economic corridor linking Bangladesh, Myanmar, China and northern India, but New Delhi did not seem keen on the idea, Zhao said.

India has a long standing border dispute with China over which the two countries went to war in 1962. Since then China has been supporting Pakistan in its dispute with India over Kashmir. China is also building a road in that part of Kashmir “illegally” held by Pakistan. More recently, China has barred India from joining the Nuclear Suppliers’ Group, and has stood in the way of the UN Security Council listing the Pakistan-based Masood Azhar as a terrorist. Azhar is wanted in cases of terrorism in India. On both issues, China has cited technical reasons for not obliging India.