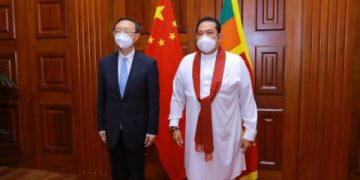 Sri Lanka and China also signed an agreement for a grant of 600 million RMB grant (Rs.16.5 billion) for livelihood development in the island. Colombo, October 10: China responded positively to Sri Lanka’s request to cooperate in the provision of a vaccine being developed by it against COVID-19, a diplomatic source said on Friday.

Lankan Prime Minister Mahinda Rajapaksa is reported to have requested for this when a top-level Chinese delegation led by Yang Jiechi, who is a member of the politburo of the Communist Party of China, called on him.

“The Chinese side responded positively to Sri Lanka’s request. Once the vaccine is developed and approved by the World Health Organisation (WHO), they will consider cooperation with Sri Lanka,” the source said.

Yang, who was in Colombo on October 8 and 9, is the highest Chinese official in terms of protocols as far as foreign relations are concerned in that country. The seven-member delegation led by him was in the country for 18 hours and interacted with President Gotabaya Rajapaksa and Prime Minister Mahinda Rajapaksa.

A diplomatic source said seven vaccine candidates qualified for human trial at the level of stage 3, and four of them were from China. According to the source, one vaccine is already in use for urgent requirements.

“The Chinese side responded positively to Sri Lanka’s request. Once the vaccine is developed and approved by the World Health Organisation (WHO), they will consider cooperation with Sri Lanka,” the source said.

The President and the Prime Minister sought investment from China in the Colombo Port City and the Hambantota Industrial Party. The Chinese side responded positively in this instance. Also, the delegation gave positive response to the President’s request for a technology university in Hambantota.

Yang served as the Chinese Foreign Minister between 2007 and 2013. At that time, he supported Sri Lanka at the UNHRC in Geneva. He also ensured support of some African countries to Sri Lanka.

The diplomatic source said the delegation followed strict health protocols in the country. They got their PCR testing within 24 hours before departure form Sri Lanka. They wore face masks and kept social distancing. They arrived in a chartered flight. The crew members also stayed at a quarantine hotel. Members of the delegation had also been vaccinated against the virus in China.