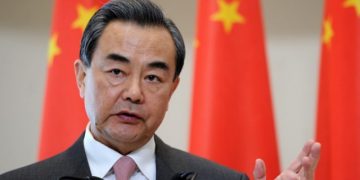 “China has stressed from the beginning the need to exercise calm and restraint and prevent escalation,” Wang said at a press conference on the sidelines of the second session of the 13th National People’s Congress.

“China hopes Pakistan and India will replace confrontation with dialogue, settle a disagreement by goodwill and create a better future through cooperation.”

Responding to a question, Wang referred to Pakistan as “China’s iron brother” and said that China welcomes the willingness expressed by the two countries in recent days to de-escalate the situation and start talks.

He said Beijing suggested the two sides find out what happened and resolve the matter through dialogue, while fully respecting each others’ sovereignty and territorial integrity.

“China hopes the two countries, which are neighbors and heirs to an ancient civilization, will get along, help each other and progress together,” Wang said.

“China also hopes Pakistan and India will transform the crisis into opportunity and meet each other halfway,” Wang said. “We advise both parties to quickly turn this page and seek a fundamental long-term improvement in their relations.”

Wang’s comments came days after China’s Vice Foreign Minister Kong Xuanyou visited Islamabad. During the visit, which concluded on March 6, the senior Chinese official reiterated Beijing’s support to Pakistan for peace and stability in the region and also acknowledged Islamabad’s measures against terrorism.

Kong also underscored that Pakistan and China are close friends and partners, said a statement issued by the Foreign Office.

The two countries reaffirmed their “time-tested and all-weather strategic cooperative partnership” during the meetings, said the FO statement, adding that Islamabad thanked Beijing for its steadfast support.

The Chinese vice foreign minister was briefed on Pakistan’s efforts to resolve all issues with India through dialogue.

“China has paid close attention to the present situation between Pakistan and India, and appreciates Pakistan’s remaining calm and exercising restraint from the beginning, and persisting in pushing to lower the temperature with India via dialogue,” the ministry paraphrased Kong as saying.

China maintains that the sovereignty and territorial integrity of all countries should be respected and does not want to see “acts that violate the norms of international relations”, Kong added.

“China calls on Pakistan and India to refrain from taking actions that aggravate the situation, show goodwill and flexibility, launch dialogue as soon as possible, and work together to maintain regional peace and stability,” he said.