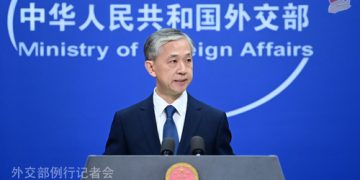 But Chinese newspapers, including the communist party run Global Times have declared Biden as the winner and written about Sino-US relations under him Beijing, November 9 (AFP/Reuters): China declined Monday to congratulate Joe Biden as the winner of the US presidential election, saying the outcome of the vote was still to be determined.

Democrat Biden clinched enough states to win the presidency but incumbent President Donald Trump has not conceded and is making legal challenges to the outcome of the November 3 election.

“We noticed that Biden has declared election victory,” foreign ministry spokesman Wang Wenbin told a daily media briefing. “We understand that the US presidential election result will be determined following US law and procedures.”

After declining to acknowledge Biden’s victory despite repeated questions from reporters, Wang said: “We hope the new US government can meet China halfway.”

In 2016, Xi sent congratulations to Trump on November 9, a day after the election.

Relations between China — among a handful of major countries including Russia and Mexico that has not congratulated Biden — and the United States are at their worst in decades over disputes ranging from technology and trade to Hong Kong and the coronavirus, and the Trump administration has unleashed a barrage of sanctions against Beijing.

While Biden is expected to maintain a tough stance on China — he has called President Xi Jinping a “thug” and vowed to lead a campaign to “pressure, isolate and punish China” — he is likely to take a more measured and multilateral approach.

Hu Xijin, editor of the Global Times, a tabloid published by the ruling Communist Party’s People’s Daily, said in a tweet: “China hasn’t congratulated Biden on his victory as quickly as Western countries did.”

“I think it’s because China needs to keep larger distance from the US presidential election to avoid getting entangled in its controversy. This actually shows that China respects the US as a whole,” he added.

Earlier on Monday, Chinese state media struck an optimistic tone in editorials, saying relations could be restored to a state of greater predictability, starting with trade.

While acknowledging that Washington was unlikely to ease pressure on China over issues such as Xinjiang and Hong Kong, the Global Times said Beijing should work to communicate with Biden’s team.

“It’s in the common interests of people from both countries and of the international community that China-US relations become eased and controllable,” it said.

The China Daily said it was “obvious” improving ties with China could start from trade, and reviving trade talks was critical to restoring some understanding and trust.

Wang Huiyao, head of the Centre for China and Globalisation and an advisor to the government in Beijing, said he expects more dialogue under a Biden administration.

“Biden’s election means an opportunity to re-establish relations with the US as he is more likely to uphold multilateralism. That means China and the US can start discussing issues including climate change, pandemic control and trade,” Wang told Reuters.