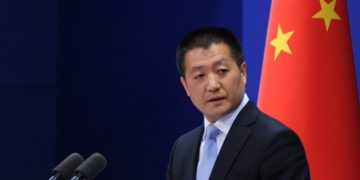 Beijing, March 13 (The Hindu): China, on Monday gave no indication that it is likely to change its stand on Masood Azhar in the UN committee that meets on Wednesday to vote on designating head of the Jaish-e-Mohammed (JeM) group as an international terrorist.

In response to a question on Beijing’s position in the upcoming March 13 meeting of the UN Security Council’s 1267 committee, Chinese foreign ministry spokesperson Lu Kang stuck to the position that the security council, as the “main body” of the UN system does not take its decisions superficially. “First I would like to say that the UNSC as a main body of the UN has strict standards and rules of procedures,” Mr. Lu said. He also signaled that that the die had not been cast on Azhar’s designation, just yet. “Some reports have knowledge of inside information the UNSC. I don’t know that can be counted as evidence,” Mr. Lu observed.

China has on three occasions placed a “technical hold” on Azhar’s designation as a global terrorist in the 1267 committee. Yet another attempt on the J-e-M chief’s designation, led by the United States, France and Britain has begun following the February 14 Pulwama attack in which more than 40 CRPF personnel were killed.

On Saturday, India urged UNSC members to label Azhar as a global terrorist, pointing out that all the members of the group were aware of J-e-M training camps and the presence of Azhar in Pakistan.

Mr. Lu hinted that China favored detailed deliberations on the issue of designation. “Only decisions made through responsible and serious discussions are the way to solve problems sustainably, “he observed.

“We have repeatedly emphasizsed China’s position on the 1267 Committee of the Security Council on the issue of terrorist organizations and individuals. China has always participated in relevant discussions in a responsible manner and in strict accordance with the principles, regulations and procedures of the 1267 Committee,” Mr. Lu said.

“ China will continue to communicate and coordinate with relevant parties in a responsible manner and properly handle this issue.”

The Chinese foreign ministry reiterated on Monday that Beijing was involved in “mediation” to ease tensions between India and Pakistan.

It also took credit for dialing down tensions between the two nuclear armed states in the subcontinent. “I have introduced here that China has used its mediation between India and Pakistan to make a lot of efforts to promote dialogue, work hard to cool the situation and promote the improvement of relations between the two sides,” Mr. Lu said.

“In the process of exchanging views with India and Pakistan on the situation in the region, security is an important issue. We have conducted extensive and in-depth communication with both parties.”

On Friday China’s state councilor and foreign minister Wang Yi, for the first time had affirmed that Beijing was engaged in “mediation efforts” to ease tensions between India and Pakistan, following the Pulwama attack.

Analysts say that China has taken an unusually high profile in lowering tensions between India and Pakistan, despite the risks involved, in case its diplomatic activism fizzles. In a conversation with The Hindu, Liu Zongyi, senior fellow of Shanghai Institutes for International Studies, said that “at least since the Kargil conflict of 1999, China would not like India to think that China favors Pakistan. We would therefore like to adopt some measures to ease your bilateral relations”.

US Trying To Persuade Pakistan To Give Up Azhar

The United States is working to convince China to allow the listing of Jaish-e-Mohammad (JeM) Chief Masood Azhar by the UNSC 1267 Committee, a senior administration official, who did not want to be named, said, speaking exclusively to The Hindu.

“We are working hard to convince China. It is not in China’s interest to shield terrorist groups operating in Pakistan, and as a responsible global power, China should take a clear stand against terrorism. So we expect China to join in designating Masood Azhar as a terrorist,” the official said.

The official said that the U.S. felt India’s frustration and that Pakistan has been isolated over the February 14 Pulwama attack and its aftermath. The U.S. was looking for permanent action by Pakistan to end its support for terror.

Pakistan had, last week reportedly detained more than 120 individuals connected to terror groups, taken over madrasas and seized assets of terror groups including those of Jamat-ud-Dawa (JuD) — a sister organisation of militant outfit Lakshar-e-Taiba (LeT) and its charity arm, Falah –e-Insaniyat Foundation (FIF) both organisations of Hafiz Saeed, a U.N. designated terrorists, wanted by India in connection with the 2008 Mumbai attack. Nevertheless, Saeed and Azhar have both been detained by Pakistan before and subsequently released.

“We are not going to be satisfied with half-measures or temporary steps like we’ve seen in the past. I do think Pakistan has to consider the reaction of the international community, the senior administration official said in Washington. “There has been a lot of solidarity with India and a lot of frustration with the fact that that Pakistan has still not cracked down on these groups. Pakistan has been pretty isolated over this situation,” the official said.

The U.S. and other world powers have been quick to step forward to help de-escalate the situation between the two nuclear powers.

“Whenever there are crises like these between India and Pakistan, there is a great deal of concern because these are nuclear states. So there is the instinct to de-escalate the situation. But there is also less patience with Pakistan’s support for these groups and more of a sense of sharing India’s frustration over these groups’ ability to operate freely inside Pakistan,” the official said, characterizing the U.S. reaction to the India-Pakistan situation.