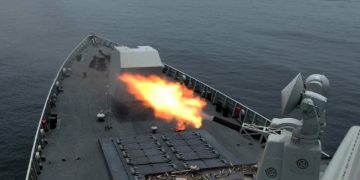 China sends warships to Eastern Indian Ocean, to checkmate India and Australia in the Maldives?

China sends warships to Eastern Indian Ocean, to checkmate India and Australia in the Maldives? Canberra, February 20:  Chinese warships have entered the Indian Ocean, marking a significant shift in regional power. They’re there to keep India away from Beijing’s interests in the strife-torn Maldive Islands. But a Maldivian government spokesman told newsin.asia that they are not aware of any such movement and that they cannot offer a comment now.

According to www.news.com.au a Chinese naval force of at least one modern destroyer, a frigate, an amphibious assault ship and a support tanker entered the Indian Ocean last week.

The Type 054A frigate (Jiangkai II) is one of more than 21 of these modern frigates deployed by Beijing. It is a stealthy design, intended primarily to supplement the air defence of a task force, though it also has some anti-surface and submarine capability.

The Type 071 amphibious transport dock is ideal for humanitarian relief — and landing forces of troops. It can carry a variety of amphibious assault vehicles and landing craft, along with two helicopters. But it also operates hospital and command-and-control facilities. It has accommodation for up to 800 troops.

It’s also backed-up by China’s 28th Anti-Piracy Task Force out of Africa. It’s believed to have wandered closer to the middle of the Indian Ocean in recent weeks.

International affairs analysts believe they’re there to stop India from intervening. And their presence has implications for Australia too.

Naval posturing is nothing new. Gunboat diplomacy has been a major player in great power games of thrones for centuries. But it is odd for it to be played out so close to Australia.

A scattering of pristine coral islands in the Indian Ocean is becoming the next flash point between New Delhi and Beijing.

The Maldives islands are in the throes of a constitutional crisis. The little democracy has traditionally been part of India’s “sphere of influence”. And the eastern Indian Ocean is, of course, of significant strategic importance to Australia.

But recently a new kid has arrived on the block.

And now Beijing’s grown enough confidence to let its presence be felt in the area’s affairs.

Beijing, after all, has big plans for these little islands. And it doesn’t want the locals getting in the way.

These islands are unlikely to appear on anyone’s radar — unless you’re after an idyllic island paradise getaway. But the Maldives have suddenly become the centre of a struggle for international influence.

It’s in the grip of a constitutional crisis.

Opposition leader Mohamed Nasheed recently dared to state that China was “buying up the Maldives” through President Abdulla Yameen. He highlighted the tiny nation was massively in debt to Beijing, and faced seizure of public assets — such as ports — to help pay it back.

Nasheed, currently in exile in Sri Lanka, said both India and Maldives should be mindful about the cold war brewing in the Indian Ocean because both are neighbouring countries.

It wasn’t long after this Yameen had key opposition figures arbitrarily arrested.

Then Yameen sprung a state of emergency on his people on February 5. It came as the Supreme Court ordered the opposition leaders be released as their arrests had been politically motivated.

So Yameen sent his security forces to arrest the Supreme Court’s judges.

This has Beijing bothered. It has invested big in a major port project there.

But it’s not the money it’s worried about. Nor is it the potential collapse of a fragile democracy.

It has implications for its grand ‘One Belt, One Road’ infrastructure campaign. This is intended to vastly expand China’s economic network — and influence — through Asia, the Middle East and into Europe.

The island might soon disappear beneath rising sea levels. We may soon see China’s ‘magical island-building ship’ pay a visit to the Indian Ocean.”

India has always been a roadblock in these plans. But now Beijing’s bypass via the Maldives may be in trouble. Which is why it wants to New Delhi to keep out.

Every day, more than 40 million barrels of oil passes through the strategic “chokepoints” at either end of the Indian 0cean. This includes the Straits of Hormuz, the Gulf of Aden and the Malacca Strait.

All pass through the waters between the Maldives and Ceylon, to India’s south.

It’s a vital arterial supply line. Not least of all to Beijing.

Chinese media is boasting about its new naval presence in the Indian Ocean. It’s been proudly displaying photos and video of its modern ships refuelling and reprovisioning at sea on a mission that is certainly a long way from home.

It’s by no means the first time a Chinese task force has entered the Indian Ocean.

This time things may be different.

The Australian Strategic Policy Institute says Beijing’s infrastructure activity is part of a determined strategy to extend its influence across the Indian Ocean — at the expense of India.

“Over the last decade the PLA-Navy has transited through the region many times to participate in UN and EU backed counter-piracy missions off the Horn of Africa. China has established its first overseas military base at Djibouti and is using the ‘One Belt One Road’ strategy to build extensive port infrastructure in Pakistan and Sri Lanka.”

In that context, the timing of this task force’s arrival in the eastern Indian Ocean is likely to be significant.

“Sending warships to operate off the Maldives is a new and concerning development, because it shows that China is trying to exercise influence over a small state more usually within India’s strategic view. New Delhi will read this as a worrying move. It will intensify strategic competition and increase mistrust between China and India.”

Some international observers had been expecting New Delhi to send its own task force to exert influence over the tiny islands’ fate. Instead, it has taken a hands-off approach through an appeal to the United Nations. It wants help to help pressure Yameen into restoring democratic values.

So Beijing has stepped into the power vacuum with a task force of its own.

But does India have a strong enough presence to keep Beijing out of its own backyard?

The chances of any clash between India and China are very low.

But the true impact of the Beijing’s warships is being felt in the corridors and back rooms of power throughout the region.

The warships give Beijing options. And status.

If things take a sudden turn for the worse in the Maldives, it can present itself as an international hero by quickly landing its troops in a “humanitarian intervention”.

It could lift its own citizens out of trouble — and those of other nations. It could impose in a “peace keeping” force to support the local political entity of its choice.

That such acts would irreparably damage India’s influence and status is an unspoken benefit.

It would also cement Beijing’s intimidating presence in what is a key “chokepoint” for its “belt” project.

If, however, the Maldives crisis does not worsen, the mere presence of Chinese warships acts as a deterrent to Indian intervention. It’s also a neon-sign of Beijing’s determination to wield its new-found influence worldwide.

India has not been sitting idle. It has been modernizing its own navy. Like China, it is one of just a few nations operating fixed-wing aircraft carriers. Neither is currently operating near the Maldives.

But New Delhi has also just signed a deal with the Seychelles islands to establish a mid-Indian Ocean naval facility of its own.

“Despite these dramatic developments, the shape and future purpose of China’s naval presence in the Indian Ocean remains an open question,” Dr Brewster says. “We should not automatically assume that the Chinese navy intends to challenge the US Fifth Fleet, at least in the short term. China will remain at a big geographic disadvantage in the Indian Ocean.”

This is because it does not have the complex and extensive supply network that the other major international influence in the region — the US 5th Fleet — has.

But it’s working on it.

There’s also bound to be push back.

“The idea of quadrilateral co-operation between India, Australia, Japan and the US — which was abandoned a decade ago because of worries it would be seen to contain China — is now firmly back on the agenda.

“It would be ironic if China’s rather amateurish attempts to build political influence in the Maldives led to enhanced co-operation between the democracies on Indian Ocean security.”