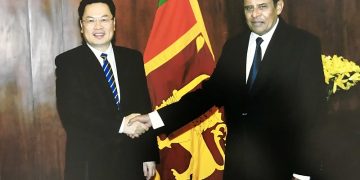 In a statement, the Chinese Embassy in Sri Lanka said China also hopes that Sri Lanka will take concrete measures to protect the security and legitimate interests of Chinese citizens in Sri Lanka.

Attaching great importance to Sino-Sri Lanka relations, the Ambassador said China is willing to work with all sectors of Sri Lanka to actively implement the consensus reached by leaders of both countries, speed up the mega projects cooperation under the Belt and Road Initiative framework and strive for early harvest to bring real benefit to the two peoples.

Foreign Minister Marapana praised the long-standing friendship between the two countries and thanked China for its long-term support to Sri Lanka’s economic and social development as well as to Sri Lanka’s efforts to safeguard national unity and stability.

Marapana emphasized that Sri Lanka firmly adheres to the “One China” policy and actively participates in the joint construction of “Belt and Road” Initiative.

He said the Ministry of Foreign Affairs of Sri Lanka will coordinate with various government departments to speed up projects assessment and approval in order to promote the friendly cooperation, and bring tangible benefits to the Sri Lankan people as soon as possible.

Minister Marapana also briefed on the current situation in Sri Lanka and thanked China for its steady position.