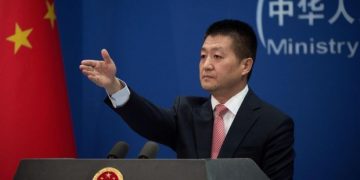 Beijing, March 14 (NDTV): China on Thursday, defended its technical block to the UN resolution to declare Masood Azhar a global terrorist, saying it would give more time to all parties to find a “lasting solution” acceptable to all. A strategic ally of Islamabad, Beijing had blocked the move to ban the Jaish-e Mohammed chief – who gets a free run in Pakistan — thrice earlier over a 10-year period.

The last ban in 2016 was also on technical grounds.

“Our action is to make sure that the committee will have enough time to study the matter so that the relevant sides will have time for dialogue and consultation,” Chinese Foreign Ministry spokesman Lu Kang was quoted as saying by news agency Press Trust of India today.

“Only a solution that is acceptable to all sides could fundamentally provide a chance for a lasting solution to the issue. China is ready to communicate and coordinate with all sides including India to properly handle this issue,” he said.

“China conducts thorough and in-depth assessment of these applications and we still need more time, so that is why we put forward the technical hold,” the spokesman said.

A global terrorist tag under the UN’s 1267 committee would have led to a freeze on Masood Azhar in terms of assets, travel and keeping arms.

The plan to propose a fresh ban on Masood Azhar under the 1267 Al Qaeda Sanctions Committee of the UN Security Council was moved by France, the UK and the US on February 27 — days after a suicide bomber of the Jaish-e-Mohammed (JeM) killed 40 CRPF soldiers in Jammu and Kashmir’s Pulwama, leading to a flare-up in tension between the two nations. The proposal was backed by an unprecedented number of nations.

India said it was “disappointed by this outcome”.

“We will continue to pursue all available avenues to ensure that terrorist leaders who are involved in heinous attacks on our citizens are brought to justice,” read a statement issued by the foreign ministry.