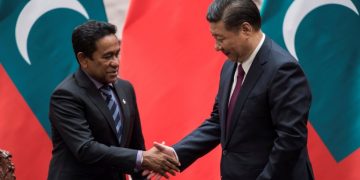 China promises not to interfere in Maldives’ internal affairs

China promises not to interfere in Maldives’ internal affairs Beijing, December 8 (newsin.asia): China has told the Maldives that it is wedded to the principle of non-interference in the internal affairs of other countries.

This is stated in the Joint Communique issued by the governments of the two countries here on Friday at the end of the three-day visit to China of the Maldivian President Abdulla Yameen.

“The two sides reiterated their mutual understanding and support for each other on issues of core interests. The Chinese side adheres to the principle of non-interference in internal affairs, supports Maldives’ independent choice of a development path which suits its domestic features, and wishes Maldives economic and social development greater success,” the communiqué said.

Such a declaration by China is of great significance to the government of the Maldives because it is under mounting pressure from the Western countries on several internal issues. The West wants the Maldivian government to stop alleged human and political rights violations and rein in alleged Islamic extremism.

The Abdulla Yameen government sees these demands, made at the instance of the opposition led by the Maldivian Democratic Party (MDP), as tactics to bring about a regime change. The West sees  the Yameen government as pro-China.

At this juncture China is the only major world power which has no issues with the Yameen regime and it is the only significant backer of the Maldivian government in the international sphere.

On its part, the Maldivian government re-affirmed to China “ its unwavering respect for the sovereignty and territorial integrity of China and reiterated its firm commitment to uphold the One China Policy.”

The Maldives also pledged its support to China’s position on Taiwan and Tibet, and the efforts of the Chinese Government to realize “national reunification.”

Beijing is trying to re-unify China by absorbing Taiwan which seceded in 1949 when the Communist Red Army took over the mainland by defeating Chiang Kai-shek’s Nationalist forces.

Maldives Commits Itself To OBOR

The Joint Communique said that the “Maldivian side reiterated its support for and participation in the 21st Century Maritime Silk Road proposed by China.”

“The two sides will deepen pragmatic cooperation under the framework of the Silk Road Economic Belt and the 21st Century Maritime Silk Road Initiative and enhance connectivity,” it added.

The Chinese side invited Maldives to attend the China International Import Expo to be held in 2018 to which the Maldives side responded positively.

The Maldivian side appreciated the assistance and support by the Chinese side to the China-Maldives Friendship Bridge Project and the Expansion and Upgrading of Velana International Airport Project, the two most important flagship projects of the Government of the Maldives.

The two sides agreed to ensure these projects be completed on time and with due quality.

“The FTA will further energize bilateral economic and trade cooperation, and benefit the enterprises and the people of both countries,” the communiqué said.

The two sides agreed that the law enforcement and security authorities of the two countries will enhance exchanges and cooperation on anti-terrorism, anti-narcotics, personnel training, mutual visits and other areas.

The two countries agreed to make full use of the Joint Meeting Mechanism to ensure the safety of Chinese tourists in the Maldives.

This is a significant pledge from China, in view of the fact that the number of tourist arrivals from China has fallen, though Chinese are the single largest group among the arrivals in the Maldives.

The communiqué further said that the two sides will enhance cooperation on human resource development. As part of HR development,, the Chinese side expressed readiness to provide more Chinese language training opportunities to Maldivians,and pledged to establish a Chinese Culture Center and a China-Maldives Ophthalmology Center.

China welcomed the establishment of the Maldivian Consulate in Kunming.

Both sides agreed to promote regional connectivity, development and prosperity. The Maldives said that it would support China’s effort to enhance its relationship with the South Asian Association for Regional Cooperation (SAARC).