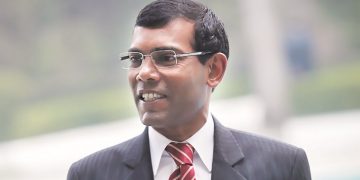 China has grabbed 16 to 17 islands in Maldives, says Nasheed

China has grabbed 16 to 17 islands in Maldives, says Nasheed Colombo, January 22 (newsin.asia): China has grabbed 16 to 17 of the 1200 islands which make up the Maldives, charged the country’s opposition Maldivian Democratic Party (MDP) leader and former President Mohamed Nasheed.

Speaking to an invited audience of foreign media persons and Western diplomats here on Monday, Nasheed said that what China is doing in the Maldives in collusion with the Abdulla Yameen regime is “land grab” and called upon the international community to help stop it for the sake of the security of the Maldives and the strategic Indian Ocean region.

He said that China has taken these islands on lease and can do anything with them, even set up military bases.

Nasheed said the investments made by China and the land acquisition which goes with them, are not transparent. No tenders had been floated and therefore there is no knowing as to what the deals are about and what they imply for the Maldives.

Nasheed said that looking at the way that Maldives-China relations are shaping up, China would have total control of the country and Maldives would lose its sovereignty within a few years.

The former President said that the MDP and the opposition are not against Foreign Direct Investment (FDI) and Free Trade Agreements (FTA), but these pacts  must be transparently negotiated and discussed with all the stakeholders to ensure that Maldivians benefit and do not lose their sovereign status.

About the Maldives-China FTA he said that it would drive Maldivian and other foreign investors out of the market as Chinese goods will be entering either duty free or with concessional duties.

Nasheed said that if the opposition comes to power in the Presidential election, it will review all agreements with China and re-negotiate  transparently.

The former President who lost to Yameen in the 2013 Presidential election, said that the coming elections should be free and fair and if  their fairness is not ensured, there will be no democracy for the next 30 ears.

“It is the last chance to save democracy” he declared.

He charged President Yameen of preventing the opposition from coming to power by determining who will vote. Yameen has also jailed or driven into exile potential rivals.

Nasheed said that he has already petitioned the UN Human Rights Committee to ensure that Yameen does not stop him from contesting. He has appealed under the Convention on Civil and Political rights.

Nasheed alleged that Yameen is building up Islamic fundamentalism and is in the grip of elements who want to impose a non-liberal form of Islam on the Maldives. Yameen has created a Deep State or a State within a State comprising Islamic zealots which he is unable to control. He pointed out that the 300 Maldivians fighting in Iraq and Syria would one day come home and if they do, the Yameen government has no plan to deal with them.

As an example of growing Islamization, Nasheed gave the recent raid on resorts to seize alcohol and pork.

The resorts raided belong to the Maldivian tycoon and Jumhoory Party leader, Gasim Ibrahim, who is now in self-exile in Germany. Ibrahim had been sentenced to three years’ imprisonment for bribery but went on parole to get medical treatment abroad. He has not returned till date.

Nasheed himself went abroad for medical treatment from jail, but never came back. He has been campaigning for the “constitutional ouster” of  Yameen with the help of the UN and the Western democracies.

Nasheed further said that, if elected, the opposition will change the constitution to enable coalition governments to survive as coalitions have come to stay.