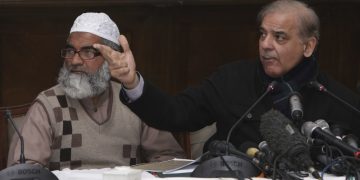 by Editor
in Around South Asia, Around The World, Pakistan, Top Story
Reading Time: 3 mins read
2 0 Lahore, January 25 (Dawn): Pakistani Punjab Chief Minister Shahbaz Sharif’s move to switch off the mic of Haji Amin Ansari, the father of Zainab Amin, during Tuesday’s press conference, has raised eyebrows, with many speculating over the possible reasons behind the action.

The chief minister had on Tuesday evening announced the arrest of Zainab’s suspected killer and rapist at a press conference in Lahore. The child’s father was allowed to speak briefly after the provincial authorities ended their briefing, but netizens are questioning why he was abruptly cut off.

Haji Ameen, speaking to DawnNews on Wednesday, said: “After I put forward our demand for a death sentence [of the suspect], the CM switched off both of the mics [in front of me].”

The televised broadcast of the press conference had shown Ameen thanking the Punjab government, law enforcement agencies, the military and courts for their assistance in the investigation of his daughter’s murder. He had acknowledged that the suspect had been arrested due to everyone’s collective efforts.

However, as Ameen finished his sentence, the Punjab chief minister leaned over to switch off the mics placed before the victim’s father.

Zainab’s father, while speaking to DawnNews, claimed that he had earlier handed over a list of demands to Punjab Law Minister Rana Sanaullah, which included an appeal that the government take measures so that no other children are abducted and raped in Kasur in the future.

Prior to the recent flood of cases, Kasur has long been infamous for child sex abuse cases, especially since authorities uncovered a huge paedophilia ring in the city in 2015. Rights organisations had found that at least 280 children were sexually abused on camera by men who later blackmailed their families, threatening to leak the footage.

However, Amin alleged that Sanaullah had told him to stick to demanding the public hanging of the accused during the press conference.

Footage recorded before the press conference showed Sanaullah tutoring Amin on what to say during the announcement.

In Punjabi, Sanaullah said he was unaware of the demands Amin had prepared and advised him to demand only punishment for the suspect during the press conference, as any other demands “would not seem appropriate”.

He could be heard assuring Amin that his demands could be discussed separately.

Zainab’s father, when questioned about the press conference, last night had said that the law minister asked him “to only demand a public hanging and speak about my other demands later.”

“Obviously, I had said certain things before the media [about Rana Sanaullah] and condemned his statements […] so he may have felt that I might say something along those lines,” he reflected.

Separately, Zainab’s mother, while speaking to DawnNews today, also took issue with the audience at the press conference applauding the investigators during the announcement of the capture of Zainab’s alleged killer.

“I am very upset. We are suffering, and they have clapped over our suffering and tears,” she said. “The suspect was allowed to get away with his deeds for two-and-a-half years – were they clapping for that?”

When asked whether she recognised the suspect, she claimed he was a stranger to her.

Zainab’s mother also demanded that the authorities “chop off the suspect’s hands immediately for strangling children”. She further called for him to be “stoned by the public as hanging was not harsh enough punishment” in her view.

Police had launched a manhunt for Zainab’s killer after the recovery of her body from a trash heap in Kasur on January 9 sparked widespread outrage and protests across the country. She had gone missing on January 4. An autopsy confirmed that she was strangled to death and raped before being killed.

The prime suspect, Muhammad Imran Ali, was arrested by police after his DNA matched the samples taken from the crime scene.

Zainab’s father, while speaking to DawnNews, also questioned how the suspect’s family was unaware of his activities.

“How is it possible that he kept a child at the house for five days and his family didn’t know? They even saw the CCTV footage. Other people might not have recognised him, but family members would have been able to,” he said.