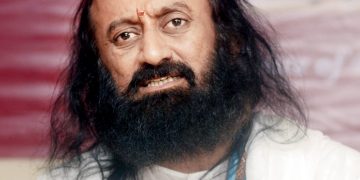 Srinagar, August 28 (PTI): Muzaffar Wani, who had lost two of his sons, Burhan and Khalid, to the Security Forces hunting Kashmiri militants, met the Art of Living founder Sri Sri Ravi Shankar at the latter’s ashram in Bengaluru and  discussed the situation in the Kashmir Valley.

“I met Sri Sri Ravi Shankar during a personal visit to Bengaluru last week. Since Sri Sri is a man of peace, I apprised him about the ground situation,” Muzaffar Wani told PTI over phone from his residence in tral in south Kashmir.

The killing of son Burhan Wani had sparked off violence in Kashmir that has left 68 persons dead and thousands others injured as the unrest entered its 51st day on Sunday.

Wani said he asked Sri Sri to use his influence in finding a solution to Kashmir problem.

“Sri Sri asked me what the people of Kashmir wanted. I asked him to visit the Valley to find out for himself,” he said.

Wani, a teacher, told him that there should be an unconditional dialogue with the separatists to find a lasting solution to the Kashmir problem.

“Hurriyat is the leadership of Kashmir and there should be an unconditional dialogue .The precondition of ‘within the ambit of Indian Constitution’ will not lead to a solution,” he stressed.

A photograph of Muzaffar Wani with the Sri Sri, posted by the latter on Twitter, had gone viral on social networking sites.

“I did not stay in a hotel as i did not find it safe. I stayed at Sri Sri’ Ashram,” he said.

“Muzaffar Wani, the father of Burhan Wani was in the ashram for the last 2 days. We discussed several issues,” Ravi Shankar had tweeted, without elaborating. The tweet was accompanied by a picture of the two together.