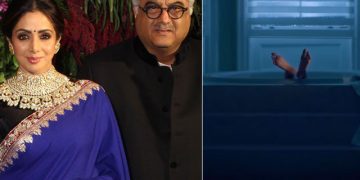 Just a few months ago, it was confirmed that Bollywood producer Boney Kapoor is acquiring the rights for a project based on his late wife Sridevi. But it looks like someone may have beaten him to it, reports The Express Tribune

In fact, Kapoor will soon be filing a lawsuit against the team of upcoming film Sridevi Bungalow for using Sridevi’s name and example. The Mr India starlet passed away last year, leaving thousands of devastated fans behind.

Sridevi Bungalow will see internet sensation Priya Prakash Varrier make her big Bollywood debut, about a year about captivating fans with her iconic wink. It has been directed by Prasanth Mambully.

But the film is already in a swirling vortex of a controversy as many – especially Kapoor – deem it to be a mockery of Sridevi’s life, reported India Today.

Hence, Kapoor has sent a legal notice to the team behind Sridevi Bungalow. Mambully himself confirmed this to an Indian news portal saying, “We have received a legal notice from Mr Boney Kapoor last week and we will face it. My film is a suspense thriller. I told him (Boney Kapoor) that Sridevi is a common name. My film’s character also happens to be an actress. We will face it (the legal case).”

Varrier, on the other hand, has refused to accept or deny whether her film is based on the real-life Bollywood veteran or not. When the news portal contacted her father Prakash with regards to the matter, he refused to comment on it, saying it was for the director and producers of Sridevi Bungalow to do so.

What comes out of the legal notice remains yet to be seen. But one can’t deny the uncanny similarities between the film and Sridevi. Considering these, it is really no surprise that Kapoor has decided to take legal action against Sridevi Bungalow

In other news, Varrier is rumored to be part of Karan Johar’s Takht, and was seen clicking photos with Ranveer Singh and Vicky Kaushal recently as well – both of whom are also part of the time. Earlier, there were also reports that the South Indian superstar would play a key role in Rohit Shetty’s Simmba as well but as it turned out, the news was false.