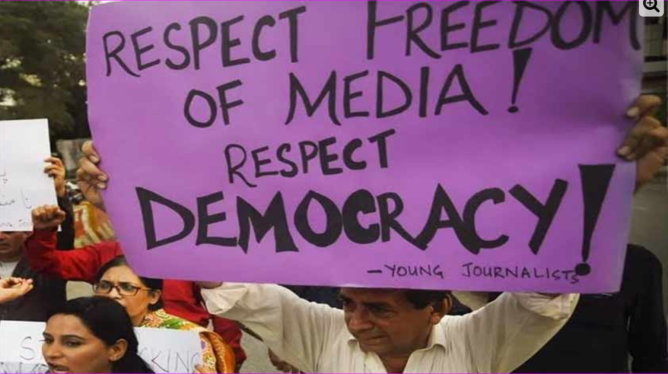 Islamabad, July 16 (newsin.asia): On 16 Februray 2020, a Sunday, Aziz Memmon was dropped by his colleagues at a place where there was a family function. Some hours later, police found Aziz’s dead body at a nearby river. Aziz was working with KTN and Daily Kawish (a Sindhi paper). He was receiving threats for highlighting some issues in Sindh’s ruling Pakistan Peoples’ Party (PPP). He had paid the price for being a fearless journalist.

But Aziz Memmon was not the only journalist to pay for being honest to his profession. In Pakistan, journalists confront risks in their line of their duty, and it could be fatal at times. They are under various types of pressure, including extremist groups which threaten, kidnap, and even murder with near total impunity.

The Freedom Network’s Annual Report says that at least 91 cases of attacks and rights violations against journalists and media practitioners were documented in Pakistan between May 3, 2019 and April 10, 2020, across all regions of Pakistan, including the four provinces and Islamabad.

This means that there was, on an average, seven cases of violations a month – one every fourth day, or twice a week. Violations included killing of seven journalists, two cases of abductions, nine cases of arrest, detention or confinement, 10 cases of physical assault, half of which caused severe bodily injuries, one case of attack on the home of a journalist, 23 cases of specific written or verbal threats, 10 cases of censorship, and eight legal cases.

Asad Toor, a producer for Aaj TV, who also hosts a YouTube current affairs channel that has about 25,000 subscribers, was beaten badly in his house. He was also being trolled on the media and social media too for blaming agencies and criticizing the government.

“It is disturbing to see the space for dissent and providing information of public importance rapidly shrink in Pakistan, with journalists as well as human rights defenders particularly at risk of censorship, physical violence, and arbitrary detention,” said Sam Zarifi, Secretary-General of the International Commission of Jurists.

On May 29, the news channel, Geo, “suspended” Hamid Mir, one of Pakistan’s best-known television talk show hosts, after he spoke at a protest rally in solidarity with Asad Toor. Asma Sherazi , a well known female journalist also faced online bullying. Some YouTubers labeled  her as an agent of a neibouring country, tried hard to prove her to be  anti-national. All three targeted journalists are based in the capital city of Pakistan.

Overall, Islamabad emerged as the most dangerous place to practice journalism in Pakistan accounting for 34% of the violations (31 out of total 91 cases). Sindh was the second-worst with 27% of the violations (24 cases) followed closely by Punjab with 22% (20 cases), Khyber Pakhtunkhwa with 14% (13 cases) and Baluchistan with 3% (3 cases) (FNA report).

Media workers in Pakistan are also facing some of the worst economic pressures associated with COVID-19 after struggling with years of systematic wage cuts. Those who protested  over non-payment of dues were laid off without clearing their outstanding dues. This has forced a large number of journalists to look for other sways of earning an income such as video blogging on social media while others are driving cabs or have opened shops to feed their families.

The Pakistani government has used a 2016 cybercrime law to target anti-government content online. But a new bill could make the environment even worse for journalists by centralizing government oversight of the media under a single authority.

An increasing number of news outlets depend on the state. As a media analyst, Huma Yusuf wrote in a column this week: “What better way to turn media outlets into state mouthpieces than by making them entirely reliant on the government to stay in business?”

During a meeting with the-U.S. President Donald Trump in 2019, Prime Minister Imran Khan said Pakistan boasts “one of the freest presses in the world.” But in fact, under Khan, press freedom has deteriorated in Pakistan.

Under the umbrella of PFUJ, journalists are fighting and raising their voices for their safety, fair wages and press freedom. The Pakistan Press Foundation’s Sindh journalist’s safety bill” was passed by the Sindh Assembly. But the Singh Governor refused to sign it, triggering universal outrage.

The Pakistani media is facing the worst-ever censorship in the era of Imran Khan according to an international watchdog. But the government rejected the report. Hamid mir , Asad Toor, Asma Sherazi, and Absar Alam are the voices of prominent journalists but there are a lot a number of unheard voices of journalists. Many were killed, tortured, harassed and kidnapped.