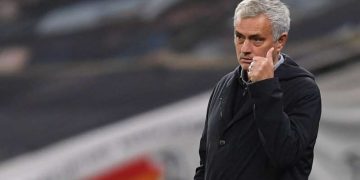 Chelsea spent over 200 million pounds to bring in Edouard Mendy, Timo Werner and Kai Havertz among others Chelsea spent over 200 million pounds to bring in Edouard Mendy, Timo Werner and Kai Havertz among others, instantly making them contenders in Lampard’s second year at the helm.

Mourinho, whose Spurs side face Chelsea in the Premier League on Sunday, said he had experienced similar pressure while managing title-winning teams at Chelsea, Real Madrid and Inter Milan.

“When you are favourites, you know why,” Mourinho told reporters on Friday. “You have to accept that and you have to deal with that kind of pressure and responsibility.

Lampard, who won two Premier League titles and an FA Cup when he played for Chelsea under Mourinho between 2004-07, played down suggestions of a rift between him and his former coach.

“When we are managers of big clubs that are rivals, it does change the relationship. Not in a bad way – I’ve got no problem with him.”