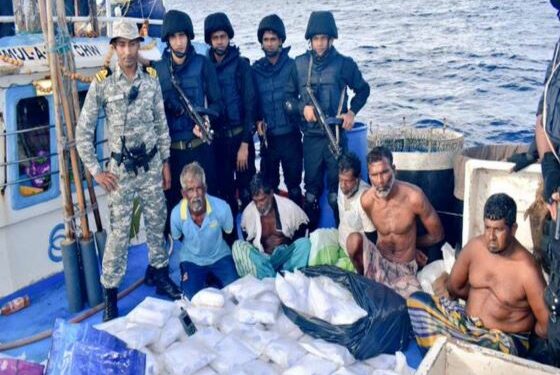 Colombo, September 13: Recent detections of large quantities of heroin from vessels sailing in the Indian Ocean have once again brought home the imperative need for cooperation between the countries of the region.

At the end of August, the Sri Lanka Navy had seized a trawler with 5 suspects, carrying over 290 kilograms of heroin. The Navy Spokesman said that the consignment of narcotics, valued at nearly LKR 2,321 million, was secured from foreign smugglers in international waters. The operation was carried out by the Police Narcotics Bureau (PNB) with the assistance of the Sri Lanka Navy, based on a tip-off received by the State Intelligence Service.

In April, the Sri Lanka Navy intercepted a vessel carrying 260 kilograms of Heroin and 56 kilograms of Crystal Methamphetamine (ICE). The Navy Spokesperson said the value of the narcotics was LKR 3,200 million. The Navy arrested seven foreign nationals, suspected to be Iranians, who were in the vessel and handed them over to police.

In the same month, India’s Narcotics Control Bureau (NCB) of Kochi seized nearly 340 kg of heroin from a Sri Lankan fishing boat and arrested five people. Initial interrogation of the five men has led the NCB to believe that the Sri Lankan boat had picked up the drug consignment from a red-colored Iranian boat. Officials told the media the Indian naval ship Suvarna intercepted the Sri Lankan boat “D.U Shashila” in the high seas in the Indian Ocean on suspicion of drug trafficking and brought the boat to Kochi’s Mattancherry Wharf for an extensive search by the NCB. The heroin consignment seized by the NCB had a street value of INR 340 crore (SLRs 8,500 million) and INR 1,750 crore (SL Rs 43,500 million) in the international market, an official of the Federal Drug Enforcement Agency in India said.

The Indian anti-drug law enforcement agencies became extremely concerned over the recent seizure of more than 600 kg of heroin and the arrest of seven Pakistani nationals by the Sri Lanka Navy in the high seas. A foreign vessel used for drug trafficking was also impounded. In the latest operation conducted by the Sri Lanka Navy, in coordination with the police and intelligence agencies, the foreign vessel carrying the drugs and the seven accused persons was intercepted about 1,370 km south of the Sri Lankan coast on September 1.

The Indian media, quoting officials of drug enforcement agencies, said the vessel, which was camouflaged as a fishing ship, had originated from the Makran coast in Pakistan.

The breakthrough came after the Sri Lankan agencies, in a similar operation on 30 August, seized about 290 kg of heroin and arrested five local suspects who were trying to smuggle the contraband into the island in a fishing trawler. The contraband had been offloaded from the foreign vessel which was later seized on 1 September. It was after a long gap that a ‘mother’ ship transporting such a huge consignment was caught. Indian officials believe the same ship was used in the past to smuggle heroin into India. According to officials, such ships are kept in international waters to evade detection. In small consignments, the drugs are transported to various destinations in trawlers.

In March, the Indian Coast Guard intercepted a Sri Lankan fishing trawler off the coast of Vizhinjam in Kerala. Over 300 kg of heroin, apart from five AK-47 rifles and 1,000 rounds of ammunition, were seized. In another case reported this July, the Directorate of Revenue Intelligence (DRI) seized about 300 kg of heroin from some containers at Nhava Sheva Port in Navi Mumbai. At the same port in August last year, the DRI had found 191 kg of heroin. Several persons, including two Customs house agents, were arrested in that case. The Indian Navy had intercepted another Sri Lankan fishing vessel in the high seas in April. It was brought to Mattancherry Wharf, Kochi, on April 19.

Subsequent searches led to the seizure of 337 kg of heroin. Officials of the the National Investigation Agency (NIA) told Media that the probe into the seizure of heroin, AK-47 rifles and ammunition off the coast of Vizhinjam near Thiruvananthapuram has led to speculation that an international drug running and weapon trading racket is aimed at reviving in Sri Lanka the LTTE, a terrorist organization now operating from abroad.

The case relates to the 18 March interception of a boat with the contraband by the Coast Guard following an intelligence input. The mastermind behind the operation was Suresh Rajan, a former Tamil resident of Colombo living in Kundrathur, a Chennai suburb, for some time.

Rajan was arrested from Angamaly, Kerala, in August and was later taken into custody by the Tamil Nadu Q-branch for his links with LTTE groups still active in Tamil Nadu and Sri Lanka. During searches conducted by NIA at premises linked to the accused in Kerala and Tamil Nadu, several incriminating documents, including books relating to the LTTE and several cellphones, gadgets and SIM cards were seized.

According to the officer, the 18 March incident was not an isolated case. “Evidence collected from Rajan after his arrest, including those of transactions worth crores, shows that he was an international drug smuggler with active links to Pakistan-based drug runner Haji Salim, who often shuttled between Dubai, Pakistan and Iran. Rajan had a prominent role in drugs and arms trafficking to Sri Lanka through the backyard of India,” the officer said.

A Tamil Nadu intelligence officer said there was evidence that Rajan met Sri Lankan drug lord Madhush Lakshitha alias ‘Makandure Madush’, who was killed in a shootout in Colombo in October 2020. “Rajan was also in touch with Salim,” said the officer.

There was evidence that Rajan and Soundarajan worked closely with individuals who are LTTE sympathizers and its reported revival mission. “If drugs were to earn money, the five AK-47 rifles seized from the boats were supposedly for LTTE sleeper cells,” the officer said.

The sleuths acknowledged they cannot confirm the strength of LTTE cells. “We cannot ascertain at this moment whether there already is a LTTE revival in Sri Lanka or Tamil Nadu, or if it is a group earning money in the guise of reviving the group” said an officer.

Two similar seizures of Sri Lankan boats — before and after the Vizhinjam incident — are still being probed by the NCB. In March, the Coast Guard intercepted a Sri Lankan boat off Minicoy with six crew members and seized another Sri Lankan boat off Kanyakumari in November with 120 kg of narcotics worth approximately INR 1,000 crore and five weapons.

Keeping the deadly LTTE at bay

Recent investigations into drug smuggling cases revealed that the money to be received after the sale of drugs was for funding the LTTE’s revival efforts. India extended the ban of LTTE for five more years from 2019. The banned outfit has been trying to regroup in India using sleeper cells and with the support of funds sourced through dirty money raised through drug trade.

C. Rajeev, Director, Centre for Policy and Development Studies told The Wire website that Tamil Nadu Chief Minister wanted to keep a safe distance from the pro-LTTE groups. “Chief Minister M.K. Stalin wants to stay clear of the LTTE and prevent the outfit from sowing the seeds of Tamil nationalism again in the minds of these refugees. The Chief Minister’s package for the Tamil refugees is a deft political move to prevent LTTE from garnering support from these refugee colonies,” said the think-tank researcher.

Last month, Tami Nadu Chief Minister M.K. Stalin announced a package of INR 317.40 crore (LKR 7,925 million) to the Sri Lankan Tamil refugee camps spread across the state. The money was for the reconstruction of the camps as well as to provide education to the children and scholarships for the postgraduate students among the refugees.