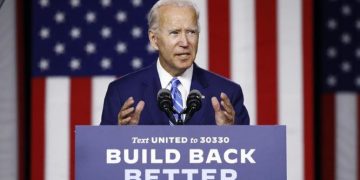 Colombo, November 9: One of the last acts of US President Donald Trump before he was defeated in the presidential election was the formal withdrawal of the US from the 2015 Paris climate change agreement. But Joe Biden, the winner in the election, has pledged to return to the agreement. He could do this with a month’s notice. A return to the historic agreement could be one of Biden’s first steps after taking office on January 20, 2021.

Last Wednesday (4), when the US officially withdrew from the global pact to reduce emissions that cause climate change, Biden tweeted that he would rejoin the Paris Agreement if elected, saying, “Today, the Trump Administration officially left the Paris Climate Agreement. And in exactly 77 days, a Biden Administration will rejoin it”.

In his campaign, Biden who had overwhelming popular support on climate change, had proposed a US$ 1.7 trillion plan to take the US, the world’s second-biggest carbon emitter, to net-zero emission by 2050.  A recent Pew Survey found that more than 80% Americans agree that humans contribute to climate change. Significantly, a plurality of Republicans also felt that way.

And American business is very gung-ho about Biden’s pledge. “While we can disagree on the scientific premise behind climate change, we should all agree that advanced energy technologies represent one of the biggest economic opportunities,” commented Hemant Taneja, Managing Director, General Catalyst. “To give that up is a threat to American prosperity. American companies will be at a huge competitive disadvantage globally if they don’t have a market to rely on in their backyard,” Taneja told techcrunch.com.

The agreement, a centrepiece of the previous Obama administration in which Biden served as vice president, was designed to limit the emissions that cause global warming so that temperatures would not rise beyond another 2 degrees Celsius.

In fact, renewable energy is making more economic sense within the US than its fossil fuel competitors. According to reports, wind and solar energy are now cost competitive or cheaper than fossil fuels in many markets. The cost of battery storage is also falling dramatically.

“Going solar is a money-saver in the long term, even though start-up costs are higher for the consumer. Electricity from fossil fuels costs between 5 cents and 17 cents per kilowatt-hour. Solar energy costs average between 3 cents and 6 cents per kilowatt-hour and are trending down, according to the National Renewable Energy Laboratory,” according to the publication Consumer Reports.

The climate change agreement was a consensual pact among 189 nations to cut greenhouse gas emissions and keep global temperatures well below 2.0C (3.6F) and endeavour to limit them to 1.5°C.

The idea was to limit, between the period 2050-2100, the amount of greenhouse gases emitted by human economic activity so that trees, the soil and the oceans can absorb these emissions naturally.

According to the UN’s Intergovernmental Panel on Climate Change, in order to have a chance of keeping end-of-century warming below 1.5°C, global emissions need to reach “net-zero’ around mid-century. This target was chosen to avoid triggering a series of catastrophic climate tipping points that could force people to inhabit only the globe’s far northern and far southern latitudes. Many of the ravaging impacts of climate change are already felt today: loss of sea ice with the expectation that the Arctic might be ice-free by mid-century; accelerated sea-level rise; longer and more intense droughts and heatwaves; stronger hurricanes and shifts in precipitation patterns.

As per the Paris deal, advanced industrialized countries are to spend a certain amount of money to bring down the use of fossil fuels and also help poorer nations by providing “climate finance” to adapt to climate change and switch to renewable energy.

The agreement required rich nations to maintain a US$ 100 billion a year funding pledge beyond 2020, and to use that figure as a “floor” for further support by 2025. It was pointed out that spending US$ 100 billion per year was only 8% of worldwide declared military spending each year. The developing countries were promised US$ 100 billion a year by 2020, though this was not considered adequate. According to BBC, many countries, especially the low-lying ones facing unsustainable sea level rises due to global warming, are wanting the target to be kept at lower than 1.5°C.

However, the pledges to cut emissions were to be voluntary and not enforceable under international law. This made the agreement inherently weak. The US and Russia were unenthusiastic about the agreement right from the start. The Clinton Administration was unable to secure Senate backing for the earlier Kyoto Protocol of 1997 which applied to advanced countries. The Obama Administration signed the2015 Paris Accord, but without Senate sanction. It remained without sanction, enabling Trump to withdraw legally and easily.

President Barack Obama’s signing of the treaty without Senate ratification meant that the Accord did not obligate the US internationally or domestically. The US, which accounts for 15% of global greenhouse gas emissions, is the only country to have withdrawn from the agreement.

But it’s leaving is indeed a big blow to the 189 countries which had signed in, especially to the small islands which face extinction from a rise in sea levels. Trump had aggressively championed the fossil fuel industry; questioned the science of climate change; and weakened other environmental protections. The Trump Administration had said it needed to use all energy sources including fossil fuels and maintained that it was doing so “in a clean and responsible manner.”

President Trump has for long held that the Paris Accord would cripple growth and intrude on American sovereignty. “It is time to put Youngstown, locations within our great country, before Paris,” the New York Times quoted him as saying in 2017 when he announced that the US would withdraw from the accord.

Some US think tanks agreed with Trump. Katie Tubb, a senior policy analyst at the Heritage Foundation, a conservative US think tank, was quoted as saying that if the goal was to reduce global temperatures, it just could not be done on the backs of the industrialized world.

“No matter what you think about global warming, and the nature of it, the pace of it, you have to take these growing economies seriously, and help them. I just didn’t see Paris getting to that end, in any efficient or constructive manner,” Tubb said.

However, the Trump Administration was not against measures to control climate change. As Secretary of State Mike Pompeo put it: “We will continue to work with our global partners to enhance resilience to the impacts of climate change and prepare for and respond to natural disasters. Just as we have in the past, the United States will continue to research, innovate, and grow our economy while reducing emissions and extending a helping hand to our friends and partners around the globe.”

But what was feared was that other countries’ willingness to control climate in their drive for industrial development might weaken as a result of US withdrawal. China, for example, could act tough.  The 2017 Trump announcement of withdrawal had already led to a softening of commitment by Australia, Saudi Arabia and Brazil.

However, despite Trump, many American industries had been curbing greenhouse emissions and hoped to cut emissions by 37% before 2030. Despite Trump’s efforts to revive the coal industry, more coal capacity was retired under his Presidency than during Obama’s second term, while renewable energy hit record highs in production and consumption in 2019.