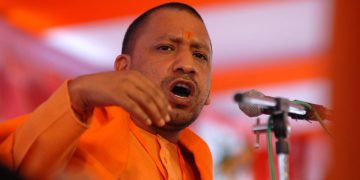 New Delhi, March 14 (The Hindu/newsin.asia): Indian Prime Minister Narendra Modi’s Bharatiya Janata Party (BJP) was thrashed in the by-elections to the Indian parliament and the State Assembly in the North Indian States of Uttar Pradesh and Bihar on Wednesday at the hands of the Samajwadi Party (SP) and the Bahujan Samaj Party (BSP) in UP and by the Rashtriya Janata Dal (RJD)  in Bihar.

The loss of Gorakhpur by the BJP is a personal blow to the Uttar Pradesh Chief Minister Yogi Adityanath as it has been his home ground. The defeat is a stinging indictment of his administration which has been marked by atrocities against the Muslims and also extra judicial killings in the name of countering crime.

The BJP scored a zero in the by polls to three Lok Sabha (parliamentary)  constituencies, two in U.P. and one in Bihar. The Samajwadi Party wrested the Gorakhpur and Phulpur constituencies in U.P., while the RJD retained the Araria seat in Bihar.

Results of two Bihar Assembly bypolls too were announced on March 14. While the RJD won the Jehanabad seat, the BJP retained the Bhabhua constituency.

The Gorakhpur parliamentary constituency was once a stronghold of Uttar Pradesh Chief Minister Yogi Adityanath. Adityanath had represented the Gorakhpur seat five times.Before him, his mentor Yogi Avaidyanath held the seat. But this time, he could not retain it.

Phulpur, once represented by the country’s first Prime Minister Jawaharlal Nehru, witnessed a saffron surge in the 2014 Lok Sabha and Uttar Pradesh Deputy Chief Minister Keshav Prasad Maurya won the seat. But it slipped out of the BJP’s hands this time within four years.

The results in UP and Bihar may be precursor to the scenario in 2019, when the country has to elect a new parliament. The BJP led by Modi  is expected to have a tough time.

Although the BJP presently controls 22 of India’s 29 States, its hold on quite a few of them is tenuous. Anti-incumbency could be a major factor going against it in the 2019 polls, unless it tackles India’s multifarious problems on a war footing, which under Indian conditions is a tall order.