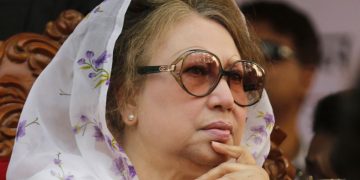 by Editor
in Around South Asia, Around The World, Bangladesh, Top Story
Reading Time: 2 mins read
2 0 Dhaka,February 8 (The Daily Star): The Chairperson of the opposition Bangladesh Naionalist Party (BNP) Begum Khaleda Zia entered the old Central Jail in Nazimuddin Road here after she was handed a five-year imprisonment in a graft case on Thursday.

She will be kept at the day care center at the old central jail.

Khaleda, who is being accompanied by her domestic help, was taken to the jail on a white SUV surrounded by a contingent of law enforcers from the Special court at Bakshirbazar.

Her eldest son and BNP’s Senior Vice-Chairman Tarique Rahman and four others was awarded 10 years in the case with a fine of Taka 20 million each in the politically significant case ahead of the parliamentary election later this year.

The judge sentenced Khaleda to rigorous imprisonment and said the term was reduced due to “her health and social status”.

Khaleda Zia is the first ever former prime minister of the country to be convicted and sentenced to five years in jail.

Of them, Kamal and Momenur are absconding.

On March 21 in 2014, a Dhaka court framed charges against the six accused.

According to complainant, a grant of US $1,255,000 was transferred from the United Saudi Commercial Bank to the Prime Minister’s Orphanage Fund. The fund was created by the then Ppremier Khaleda shortly before the transfer was made on June 9, 1991.

The complainant alleged that the fund was created as part of the embezzlement scheme, and only Khaleda administered the fund.

Following  Thursday’s verdict,  there is a possibility that she might not be able to contest the election slated for December this year.

In her 35 years of political career, Khaleda has gone to jail several times but never due to conviction. She was detained several times during the anti-Ershad movement in the 1980s and in 1990.

During the 2007-2008 tenure of the army-backed caretaker government, she was in jail for about a year on a charge of corruption.

Khaleda was made vice-chairperson of BNP in March 1983 after the assassination of her husband and former President, Ziaur Rahman. She became the chairperson of the party on May 10, 1984, a post she is holding still.

(The featured image at the top shows Khaled Zia)