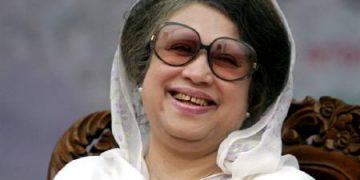 “Many BNP leaders are now in jail, while people are passing their days amid threats of militant attacks. Under these circumstances, Khaleda Zia’s birthday would not be celebrated this year,” Fakhrul said. .

BNP standing committee member Lt Gen (retd) Mahbubur Rahman told  the paper that he welcomed the decision of Khaleda Zia to cancel her birthday celebration on  August 15 when Bangabandhu Sheikh Mujibur Rahman and most of his family members were killed in 1975.

“The nation knows that it is not her real birthday. She just celebrates the fake birthday on this day as a part of her politics of vengeance,” he said.

Party insiders said though the BNP mentioned the present situation of the country for cancelling the celebrations of her 71 st birthday, she had taken the decision as the pro-BNP intellectuals and some other politicians told her that her recent initiative for forging national unity against militancy would be questioned if she celebrates her birthday this year.

They also added that Khaleda wanted to see the reaction after cancelling the programme and she believed that she would be benefited in future.

On October 26, 2013, in a telephone conversation with Khaleda Zia,  Prime Minister Sheikh Hasina had raised the issue of celebrating her birthday on August 15.

Recently, in a meeting with Khaleda over the forging of unity against militancy, Krishak Sramik Janata League President Kader Siddique also urged Khaleda not to observe her birthday on the day.