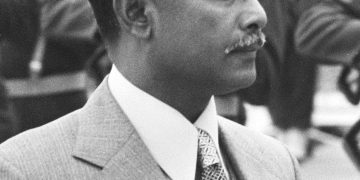 Authorities from the Secretariat held a meeting with the acting Director of the museum and removed Zia’s crest and other accessories. The Swadhinata Padak is the highest state award given by the government of Bangladesh in recognition of a person’s outstanding contributions to a field

Ziaur Rahman was a Pakistani army officer who mutinied and fought against the Pakistani army during the liberation struggle in 1971. He was President of Bangladesh from 1977 till his assassination by some army officers in 1981. He founded the Bangladesh Nationalist Party (BNP) which is one of the two principal parties in the countries today. The party is currently led by his widow Khalida Zia.

But the Awami League, founded by the Father of Bangladesh, Sheikh Mujibur Rahman, has been against Zia because he was in the know of the plot to assassination Mujib in 1975 and might even have been a collaborator. As President, he gave legal indemnity to the killers of Mujib and rewarded them with high posts at home and abroad. He also Islamized Bangladesh and promoted radical Islamic and pro-Pakistan parties despite mutinying against the oppressive Pakistani army and being the first to announce the independence of Bangladesh over the radio in 1971.

BNP, which currently holds no seats in parliament after opting out of the last general elections, has been hinting at the revocation of Zia’s  Swadhinata Padak.

“The first phase of the ongoing war crimes trial has come to the end. Recently our countrymen have raised a demand for confiscating properties of war criminals. The International Crimes Tribunal has not given any suggestion in this regard. In this situation, government is considering enacting a law to deal with the matter. The court will give the final decision on confiscating the properties,” Law Minister Anisul Huq said.

In response to another query, Huq  said the International Crimes Tribunal Act has already been amended to ban Jamaat-Shibir. It is now awaiting cabinet nod.