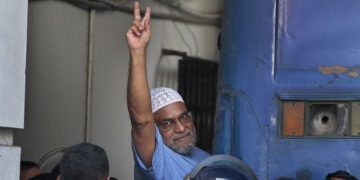 Aug 30 (NIA) – Bangladesh’s highest court on Tuesday rejected a final appeal made by the leader of an Islamist party against his execution for atrocities committed during the 1971 war of independence.

63-year-old Mir Quasem Ali’s lawyers said the verdict means that Ali could be hanged at any time.

The verdict comes at a time when Bangladesh is facing a rise in militant attacks, the most serious on July 1, when gunmen stormed a cafe in the capital, Dhaka, and killed 20 hostages, most of them foreigners.

Reuters reported said that the rejection, by a panel of five judges headed by Chief Justice Surendra Kumar Sinha, comes a day after a visit by U.S. Secretary of State John Kerry during which he urged Bangladesh to uphold democratic principles.

Ali is a leader of the Jamaat-e-Islami party and was convicted on eight charges that included the abduction of a young man and his killing in a torture cell.

Several other Islamist leaders have already been executed for war crimes.

“Now it is only a matter of time to execute the verdict, unless he (Ali) seeks clemency from the president,” Attorney General Mahbubey Alam told reporters on Tuesday.

The Jamaat leader and his family have yet to decide whether to approach the president, said Ali’s lawyer, Khandaker Mahbub Hossain. “All the legal battles are over now,” he told reporters.

Hundreds of people cheering the verdict flooded the streets of the capital, Dhaka, and the southeastern port city of Chittagong, where torture camps were set up during the war.

Local media reports said that since December 2013, four Jamaat leaders, including former top leader Motiur Rahman Nizami, and a leader of the main opposition party, have been executed for war crimes.