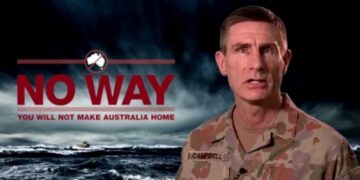 The Australian High Commission in Sri Lanka, in a statement said that in December 2017, Australian border protection authorities intercepted a people smuggling boat with 29 Sri Lankan nationals on board and all 29 people were returned to Sri Lanka.

“The vessel intercepted in December was headed for Australia, but several passengers indicated they
had left Sri Lanka thinking they were travelling to New Zealand,” the High Commission said.

Australian High Commissioner to Sri Lanka Bryce Hutchesson said the interception of this boat showed that some people in Sri Lanka still wrongly believed it was possible to travel illegally to Australia or New Zealand by boat, or that there was some benefit to be gained by attempting this dangerous voyage.

“In the past four years, every Sri Lankan people smuggling boat that has entered Australian waters has been stopped, and everyone on board these boats has been returned to Sri Lanka,” Hutchesson said.

“Australia’s border is very well protected. Anyone who says otherwise is lying,” the High Commissioner added.

“People may have reached the Australian region illegally in the past, but Australia’s defences against people smuggling are now stronger than ever.”

Hutchesson further thanked the Sri Lankan Government for its strong ongoing cooperation and said Australian and Sri Lankan authorities were working closely together to track down those responsible for organising this latest people smuggling venture, and to shut down people smuggling syndicates operating in the region.

Since the implementation of Australia’s toughest ever border protection measures in 2013, Australia has intercepted and turned back or returned 800 people from 32 people smuggling vessels; including more than 165 Sri Lankan nationals.