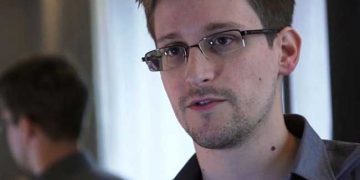 by Editor
in Around South Asia, Around The World, India, Top Story
Reading Time: 2min read
1 0 New Delhi, January 9 (NDTV):  American whistleblower Edward Snowden has tweeted his sharp disapproval of a police case against journalist who exposed gaps in the security of biometric details of millions of citizens recorded in the Aadhaar database.

In a post on Tuesday, the former US intelligence contractor came out in support of the journalist who reported that she could access personal details of over a billion citizens for just Rs. 500 paid through a digital wallet. Snowden also criticized the government for “policies that destroyed the privacy of a billion Indians”.

He tweeted: “The journalists exposing the #Aadhaar breach deserve an award, not an investigation. If the government were truly concerned for justice, they would be reforming the policies that destroyed the privacy of a billion Indians. Want to arrest those responsible? They are called @UIDAI.”

Snowden has spoken against the Aadhaar earlier too. “It is the natural tendency of government to desire perfect records of private lives. History shows that no matter the laws, the result is abuse,” he had tweeted last week.

UIDAI, which oversees the world’s largest biometric identity card scheme, had gone to the police against the journalist from the Tribune newspaper and insisted there was no breach in its system.

Outrage over the case against the journalist forced an intervention by I-T minister Ravi Shankar Prasad and pushed the UIDAI to clarify that the case was not against any specific individual.

In a tweet, Mr Prasad asserted that the government supports freedom of press and that the newspaper and its reporter would be asked by the UIDAI to help investigate the alleged data breach.

9
COMMENTS”Govt. is fully committed to freedom of Press as well as to maintaining security & sanctity of #Aadhaar for India’s development. FIR is against unknown. I’ve suggested @UIDAI to request Tribune & it’s journalist to give all assistance to police in investigating real offenders,” the minister posted.

In a separate case yesterday, the Supreme Court, which is hearing a petition challenging the validity of Aadhaar, made it clear that politicians should “allow freedom of expression”.