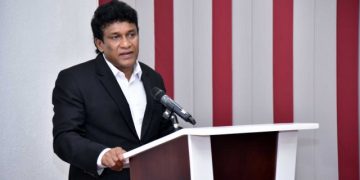 But the opposition alliance will have a new name, symbol and constitution. Colombo, February 3 (newsin.asia): The Democratic Peoples’ Front (DPF) leader Mano Ganeshan said in a press release on Sunday that the Working Committee of the opposition United National Front (UNF) has decided that all sitting UNF MPs will be renominated for the coming elections to the Sri Lankan parliament. The constituent parties will present their 2015 list of candidate again for re-nomination.

The Working Committee which met here on Sunday also decided that a committee under the chairmanship of the UNF chief, Sajith Premadasa, will decide on other nominations.

Every constituent party will enter into an agreement with the alliance.

Elections are expected in April 2020.

DPF leader Ganeshan said that it was decided to fight the parliamentary elections not under the banner of the UNF but under another name and symbol which are to be decided soon. The alliance will also have a new constitution.

While Sajith Premadasa will be the alliance’s chief (and also the Prime Ministerial candidate), the General Secretary of the UNF will be the senior United National Party leader Ranjith Madduma Bandara.