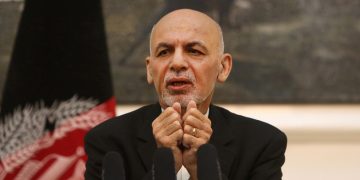 It will be a landmark accord that could pave the way for the notorious warlord’s political return after years in hiding.

Hekmatyar, who heads the now largely dormant Hezb-i-Islami militant group, is the latest among a series of warlords whom Kabul has sought to reintegrate into Afghan politics in the post-Taliban era.

If inked, the deal with Afghanistan’s second-biggest militant group would mark a symbolic victory for Ghani, who has struggled to revive peace talks with the much more powerful Taliban, the agency said.

“The peace agreement will be finalised very soon,” Ghani said in his address on the occasion of the Islamic festival of Eid-ul-Adha.

“We hope for peace in Afghanistan and to end the war in the country.”

Ghani’s statement comes after months of negotiations with Hizb-i-Islami, which has progressed in fits and starts over differences within the government over the final draft agreement.

On Sunday, Hekmatyar’s son said on Facebook the agreement had been reached but the High Peace Council, the government body responsible for negotiations, said talks were still underway.

Hekmatyar was a prominent anti-Soviet commander in the 1980s and stands accused of killing thousands of people in Kabul during the 1992-1996 civil war.

He is widely believed to be living in hiding in Pakistan, but his group claims he is inside Afghanistan.

The potential deal, which is unlikely to have an immediate impact on the security situation in Afghanistan, has sparked revulsion from human rights groups.

According to a draft agreement seen by AFP, the government will offer Hekmatyar legal immunity in “all past political and military proceedings” as well as release Hezb-i-Islami prisoners.

Hekmatyar is designated a “global terrorist” by the US and is blacklisted by the UN. The Afghan government would work towards lifting those restrictions, according to the draft agreement.

Who is Gulbuddin Hekmatyar?

He is one of the most controversial figures in modern Afghan history. A former prime minister, he is remembered chiefly for his role in the bloody civil war of the 1990s.

Hekmatyar was in a tenuous alliance with the Taliban, although both sides remained suspicious of each other, says BBC in a profile of the Afghan leader

In 2003, the US state department designated him as a terrorist, accusing him of taking part in and supporting attacks by al-Qaeda and the Taliban.

Observers say his current willingness to hold talks with the Afghan authorities is significant as it may now put pressure on the Taliban to also start reaching out to the government.

Hekmatyar’s mujahideen faction, the Hezb-e-Islami, was one of the groups which helped end the Soviet occupation of Afghanistan.

For a majority of Afghans, he was one of the heroes of that struggle.

But in the free-for-all that followed in the early 1990s, his group of fundamentalist Sunni Muslim Pashtuns clashed violently with other mujahideen factions in the struggle for control of the capital, Kabul.

The Hezb-e-Islami was blamed for much of the terrible death and destruction of that period, which led many ordinary Afghans to welcome the emergence of the Taliban.

The civil war also led to Hekmatyar’s fall from grace – he quickly became one of the most reviled men in the country.

For some time, Hekmatyar himself enjoyed considerable support from Pakistan and Saudi Arabia. But eventually Islamabad turned against him, preferring to give full support to the Taliban instead.

So like the other mujahideen factions, Hekmatyar and his men were forced to flee Kabul when the Taliban swept into power in 1996.

He ended up being given refuge in Tehran, where he lived a quiet life,  waiting for his fortunes to change.

he Iranians may have regarded him as a potentially useful Pashtun card to have up their sleeve, but he turned out to be too much of a wild card for them.

His vocal opposition both to the Americans and to the new regime of President Hamid Karzai was an embarrassment to the Iranian government, which threw its official weight behind Mr Karzai.

In February 2002, the Iranian authorities expelled Mr Hekmatyar and closed down the offices of his Hezb-e-Islami in Tehran. They accused him of abusing Iranian hospitality with his comments vowing to fight the Karzai administration.

In March of the same year he offered an olive branch to Karzai.

A spokesman for Hezb-e-Islami in Pakistan said Hekmatyar was giving full support to the Karzai administration, although the warlord’s whereabouts remained a mystery.

Soon after, however, the Afghan administration arrested 160 people in Kabul in a suspected anti-government plot.

The government said the detainees had been conspiring to plant bombs in Kabul and that most were members of Hezb-e-Islami.

Hekmatyar remained elusive. In May 2002, the CIA reportedly spotted him in the Shegal Gorge, near Kabul, and tried to kill him with a missile from an unmanned spy plane. It missed.

The US continued to tighten the screw and was reportedly behind the arrest in Islamabad in October of  Hekmatyar’s son, Ghairat Baheer.

Hekmatyar’s response was defiance. At the end of that year, he warned that a holy war would be stepped up against international troops in Afghanistan.

His message was distributed along the Afghan-Pakistan border to drum up recruits.

The message read: “Hezb-e-Islami will fight our jihad until foreign troops are gone from Afghanistan and Afghans have set up an Islamic government.”

Since then, Hekmatyar has slowly and steadily rebuilt his power base, especially in eastern Afghanistan.

He has also continued to reiterate his ties to al-Qaeda and the Taliban.

In a 2006 interview, he claimed his fighters had helped Osama Bin Laden escape from Tora Bora.

His followers were involved in some audacious attacks in Kabul, including an attempt on the life of President Hamid Karzai in April 2008.

He was one of the three most important insurgent leaders, along with Mullah Omar and another Taliban leader, Sirajuddin Haqqani.