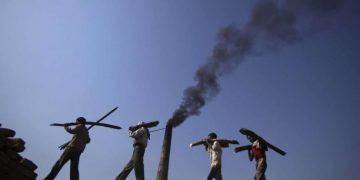 Announced during Prime Minister Narendra Modi’s visit to the United States in June 2017 — and its intensity enhanced when Modi visited Houston in September 2019 — the Strategic Energy Partnership has emerged as a cornerstone of expanding India-U.S. ties. Houston Chronicle, September 26: India’s quest for energy security offers limitless possibilities to U.S. companies and has the potential to oil the engines of economic growth in both India and the United States. As we slowly move toward opening up, the partnership has the potential to play an important role in economic recovery.

The energy market in India is vast and growing rapidly. It is the world’s third-largest producer of electricity and set to be the largest energy market before 2030. The IEA’s World Energy Investment 2019 report highlights that among major markets, energy investments in India have grown the most over the past three years, with an investment of $85 billion. India offers a huge market; the United States is abound in energy resources and leading technologies including in natural gas and solar — the complementarities and synergies are striking.

Numbers speak for themselves. There has been an increase of 93 percent in the hydrocarbons trade between India and the United States in the last two years; it reached $9.2 billion in 2019 and 2020. India is now the fourth largest international market for U.S. crude oil and the fifth largest for U.S. liquefied natural gas. Indian firms have concluded several contracts for sourcing crude from the United States and are expanding their investments in the U.S. energy sector, creating jobs and economic opportunities.

While crude oil and liquified natural gas transactions have been impressive, it is important to note that these comprise only one of the four pillars of U.S.-India energy cooperation. The other pillars — power and energy efficiency, renewable energy and sustainable growth — are equally critical. Underlying all of these is innovation. Indian and U.S. entities are also working together to advance cooperation in civil nuclear energy.

Cooperation with the United States in the natural gas sector is a priority for India. As India evolves into an increasingly gas-based economy, natural gas infrastructure — pipeline networks, city gas distribution grids and LNG terminals — is being ramped up across the country. Significant opportunities exist for the U.S. companies in LNG bunkering, container development, petrochemicals and biofuels.India is primed for investment of $118 billion in oil and gas exploration, and natural gas infrastructure, including urban consumer gas distribution networks over the coming five years. For U.S. investors and energy companies with their global footprint, India is the new frontier.

Under the U.S.-India Gas Task Force, several partnerships have been underway. Notable ones include collaboration between the respective regulatory entities on information exchange, between Bloom Energy and Indian Oil on fuel cell technology, and among ExxonMobil, Chart Industries and IOCL on stimulating LNG demand. Indraprastha Gas Limited and Agility Fuel Solutions LLC and Gasway USA Inc. have agreed to explore the viability of advanced clean fuel systems.

ExxonMobil and GAIL are now engaged in commercial dialogue to enhance India’s natural gas access to advance LNG as fuel in heavy vehicles. The list continues to expand.

As India builds strategic petroleum reserves at home, India is also looking to lease crude storage capacities in the United States. An agreement for cooperation in this area was signed in July 2020.

For clean energy, India is the new home. Buoyed up by the current progress, India is well on the target to create 175 gigawatt capacity from renewables by 2022.

The United States and India are working to strengthen power grids and distribution utilities for clean, affordable and reliable energy access. Under the “Ujjwala Yojana” (the Hindi word “ujjwal” denotes brightness or optimism) over 80 million economically underprivileged families have been provided subsidized cooking gas cylinder connections over the past four years. This program has had a positive ecological impact and provided preventive health benefits to homemakers, many of them women.

India and the United States are collaborating on several R&D initiatives. This focuses on smart grids and energy storage, so as to enhance efficiency and reliability of the electric grid. Other areas of collaborative research encompass advanced coal technologies for power generation and hydrogen production, including carbon capture, use and storage The U.S. Development Finance Corporation’s $600 million financing facility announced for renewable energy projects in India is bound to spur growth in the sector.

In an uncertain world, the key to effective partnerships between nations is reliability, trust and long-term commitment. The India-U.S. strategic energy partnership touches all three aspects. The pandemic has only reminded us of the need for more focused and expeditious action to galvanize economic growth through mutually beneficial collaborations.