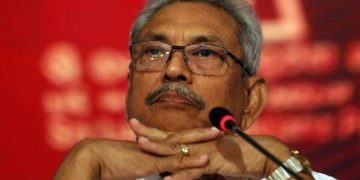 The sweeping powers given to the Presidential Task Forces need validation by parliament, says CPA Colombo, June 9: The Sri Lankan think tank, Center for Policy Alternatives (CPA), has drawn attention to the dangers inherent in the Gotabaya Rajapaksa regime’s  penchant for running the country through high powered Task Forces, members of which are either serving or retired security forces officers or are chosen on the basis of personal loyalty.

Power passing into the hands of such unelected out powerful bodies in the absence of parliament, could undermine democracy and lead to militarization of governance, the CPA warns in a just-released report.

President Gotabaya came to power in 2019 promising to set up a disciplined, secure, and stable Sri Lanka. Laudable as these goals may be, recent developments indicate that his preferred path to fulfilling these promises circumvents existing legal structures including his own Cabinet of Ministers, the CPA’s report points out.

The Task Forces with wide powers could well undermine and potentially usurp the powers of existing legally empowered institutions, it says.

“The militarization and securitization of government and governance, set in motion with combatting COVID-19, is now consolidating itself in the absence of an elected legislature. If unchecked, such executive overreach will have a chilling impact on a free and open society and transform it into one defined by ethno-nationalism propelled by an authoritarian and militarized State,” the report sternly warns.

Alluding to the particularly controversial “Task Force to build a Secure Country, Disciplined, Virtuous and Lawful Society, “ the report says that the mandate set out for the Task Force lacks clarity which could lead to gross abuse.

Several terms used throughout its text have no legal definition and are vague, providing for wide interpretation and possible abuse. For example terms like Secure Country, Disciplined, Virtuous, Civilized Society, and Antisocial Activities could be interpreted in various ways and can be misused to curb activities and behaviours whimsically and arbitrarily by authorities with an agenda.

“Vague terminology coupled with moral policing has led to situations of targeting, discrimination and abuse. CPA is troubled that the presence of such vague terms coupled with the ad-hoc nature of the Task Force and its composition could lead to a situation where the behaviour of citizens and society at large could be policed and lead to the stifling of dissent.”

“The lack of civilian representation in this Task Force is consistent with the descent into militarisation of the State apparatus which has been taking place over the last few months, with retired military personnel being appointed to several high ranking official.”

“Whilst militarization is not a new phenomenon in Sri Lanka, the consolidation of military and intelligence in governance is at an unprecedented level with serious implications towards the rule of law, reconciliation and constitutional democracy. CPA has on several occasions previously, commented on why militarization is undesirable in a democracy especially in a post -war country which is yet to see genuine reconciliation and transitional justice. In the absence of legislative oversight, the chilling effect of a Task Force having such control over civilian life, including possibly moral policing, is alarming,” the report says.

The question arises as to whether, in carrying out its mandate, the Task Force will coordinate efforts between established authorities which are legally empowered to carry out the said functions or will it actually carry out these functions itself?

The tasks listed contain phrases like ‘taking steps to curb’ ‘prevent’  ‘take legal action against’ and ‘investigate’, suggest that the Task Force is also an implementing agency. In that case, what is the status and role of the existing legally empowered implementing agencies?

“If this is an attempt to in fact bestow fresh powers on the Task Force, it is both ultra vires the powers of the President under Article 33(2)(h) of the Constitution, as well as the individual laws which authorize other authorities to carry out these functions,” the CPA points out.