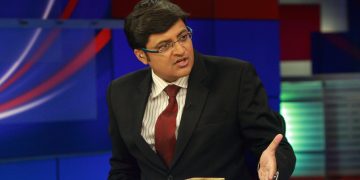 by Editor
in Around South Asia
Reading Time: 1min read
2 0 Arnab Goswami, Indian Journalist, Editor in Chief and News anchor of the news channel Times Now at his office in Mumbai.(Photo by Bhaskar Paul/India Today

New Delhi, October 17 (NIA): The Times NOW TV channel editor-in-chief Arnab Goswami will receive “Y category” security cover from the government after the Intelligence Bureau perceived a threat to his life from “Pakistan based terrorists groups”, the Hindustan Times reported.

The journalist will get 24-hour protection from around 20 security personnel, including two personal security officers, who will guard him from close distance.

“Goswami is being given security on the basis of a threat-perception analysis by the IB. We will go by the IB recommendation. He faces threats from Pakistan-based terrorist groups due to his comments against them on Times Now,” a Union Home Ministry official, who did not want to be identified as he is not authorised to speak to the media, told the Hindustan Times.

The journalist, who is known for his prime time news-hour debates, has been very vocal against terrorists organisations and Pakistan since Uri terror attacks on 18th September in which 19 army soldiers lost their lives. Goswami, who is based out of Mumbai, has not yet commented on the development. His security is likely to be looked after by the Maharashtra government.