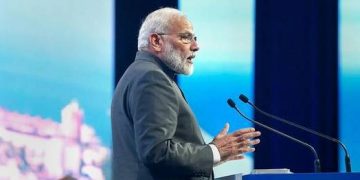 When Indian Prime Minister Narendra Modi grandly announced at the Eastern Economic Summit in Vladivostok in Far East Russia last week that India will extend a US$ 1 billion Line of Credit for the development of the Russian Far East, it came as a surprise. It was the first case of a developing country lending money to an advanced country in the post-colonial world.

But Modi had reasons to do what he did, both on economic and strategic grounds. The Russian Far East is rich in natural resources: oil and gas, coal, gold and other metals, fresh water, forests, fish and arable land. And as one report said, the most important aspect is that Siberia and the Russian Far East are close to the rapidly developing Asian countries with their rising demand for natural resources and resource-intensive industries.

No wonder then, that the Russian Far East (RFE) now accounts for 32% of the FDI into Russia. However, Russia, as a whole, is becoming an attractive foreign investment destination. It now ranks 31 among 190 countries in terms of Ease of Doing Business, according to its Deputy Prime Minister Yury Trutnev, who is also in charge of the Far East.

The Putin government has taken several steps to boost FDI although many Russian sectors are barred for FDI on nationalistic or security grounds.  One of the steps he took was the establishment of the Russian Direct Investment Fund (RDIF) in 2011. The total sum of FDI attracted by the RDIF is estimated at U$15 billion.  In 2012 Russia initiated its ‘Turn to the East’ policy to develop the Siberian and Far Eastern federal districts and established the Ministry for the Development of the Russian Far East.

Deputy Prime Minister Yury Trutnev said in New Delhi in June that 17 countries have invested in Russia’s Far East. India too has started investing and among the Indian companies interested are Tata Power and KGK Diamond, he added.  Currently, India’s Oil and National Gas Commission Videsh has invested over U$ 6 billion in oil and gas and exploration there

Trutnev discussed the possibilities of Indian cooperation in the development of the Russian Far East with the Indian Foreign Minister Dr.S.Jaishankar in June. A few days earlier, Russian President Vladimir Putin and Indian Prime Minister Narendra Modi had met in Bishkek in Kyrgyzstan on the sidelines of the Shanghai Cooperation Council summit, and discussed Indian investments in the Far East.

Russia followed this up by inviting Modi to be the Chief Guest at the Eastern Economic Summit in Vladivostok due in the first week of September. And it was at the summit that Modi grandly announced that India is offering Russia US$ 1 billion as a Line of Credit for Far East development.

“In order to continue and help develop the Far East, India will provide a US$1 billion credit line. This is a completely unprecedented measure when we provide such a special credit line to another country,” Modi said.

He added that Indian businessmen who came with him had signed 50 agreements with counterparts in Russia’s Far East in a variety of sectors from energy, mining and woodworking to healthcare and education. “We expect that, as a result, we can provide investments amounting to US$5 billion,” Modi stated.

According to Chandrajit Banerjee, Director General of Confederation of Indian Industry (CII), India can provide skilled personnel in many areas such as education, ICT, healthcare, hospitality, farming and others.

It was in 2018,  during the visit to Russia of the then Indian Foreign Minister, Sushma Swaraj, that India and Russia came to an understanding on establishing a “Vladivostok-Chennai Sea Link” which will reduce the transport time from the existing 40 days to 24 days.

The Vladivostok-Chennai Sea Link is partly also meant to counter China’s Maritime Silk Route (MSR) plan which is a part of its One Belt One Road (OBOR) project. According to Western observers, China’s ambitious MSR project is all about establishing, and directly controlling,  the Asia-Africa sea route.

The Vladivostok-Chennai shipping link could pass through or very close to the South China Sea, which China has allegedly turned into an international geostrategic hotspot by claiming exclusive control over the resource rich maritime zone.

It is in view of this that Modi said in his Vladivostok speech that the Far East will become the bedrock of strong Indo-Russian ties which in turn will be based on a “rules-based maritime order, sovereignty, respect for territorial integrity.”

Generally, Sino-Russian relations have been “at their best time in history” as, Chinese President Xi Jinping  said.  And this was backed up by the announcement of a US$10 billion fund for cross-border infrastructure projects. But for all the fanfare, Chinese investment in the Russian Far East has been a source of tension in Russia. There is local resentment against a supposed  increase in the Chinese population. The Chinese are in trade and in agriculture though this is partly on account of the incentives given to them. Their behavior pattern in public places generates resentment among the local population.

There is also a fear of a Chinese take-over the Far East as this region was with the Qing dynasty of China before it was conquered by the Russian Czar and a humiliating treaty was imposed on the then weak China.

According to one report, some Russian political groups and media outlets have tapped into this anxiety over a Chinese take over and deliberately sensationalized it.  “A film China – a Deadly Friend (in the series “Russia Deceived”) became an  internet hit after its release in 2015. The report said that in the film, China is shown as invading the Far East. Russians also remember the decades of Sino-Soviet split and stand-off.

However, a careful study will reveal that there is actually no  Chinese influx into any part of Russia including the RFE. Chinese come as well as leave. They come to exploit the economic opportunities which are aplenty, but they also leave for economic reasons. Their trade is affected by exchange rate fluctuations as well governmental harassment. India can fill this gap to some extent.

But India is unlikely to confront China in any significant or noticeable way because the two countries have been successfully managing their relations in a fine-tuned manner from the time A.B.Vajpayee was Indian Prime Minister. No war was fought over Doklam at the India-Bhutan-China tri-junction in 2017. Though the Sino-Indian border in the North East is yet to be demarcated and China holds a large chunk of Aksai Chin in India’s  Ladakh  district, no shots have been fired across the border for decades. The watchword has been “peace and tranquility on the border,” for both sides.

Though India had to struggle hard against China to get the Pakistan-based terrorist Masood Azhar designated by the UN,  bilateral relations in economic matters only got better. Modi and Xi Jinping had met one-to-one at Wuhan and created the “Wuhan spirit”. They  are due to meet in Mamallapuram near Chennai in the middle of October for another one- to-one summit. And this, despite China’s supporting Pakistan on the Kashmir issue in the UN Security Council.  As Indian Foreign Minister Jaishankar said, India is of the view that in Sino-Indian relations “differences should not become disputes.”