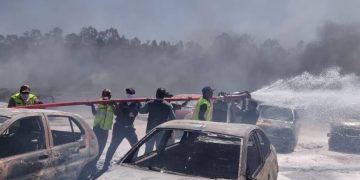 Bengaluru, February 23 (The Hindu/Quint): A fire broke out in the general parking area of the Aero India at the front of Yelahanka Air Base here, damaging over 300 vehicles.

The billowing smoke was spotted at the end of the morning aerobatics display on Saturday and caused mild panic.The blaze started just moments after badminton star, PV Sindhu, took off in an LCA Fighter.

Earlier on Tuesday, just a day before the commencement of the show, two aerobatic planes had collided in mid air killing one pilot.

Defense Ministry officials, however, attempted to keep the calm at the Air Base, by announcing: “The fire and smoke you see that from normal domestic fire of dried leaves. There is nothing to worry.”

The show has seen the largest number of visitors so far.

Ten fire tenders had been deputed.

Chief of Fire & Emergency Services Director General Fire, M. N. Reddi, said that over 300 vehicles were gutted in the fire that broke out at the Gate 5 of the general parking area. The cause of the fire is unknown, but is believed to have started as a ground fire from the dried grass in the parking lot.

After a brief halt, flying operations too have now resumed and the air display will continue as planned. There have been no injuries reported in the incident.