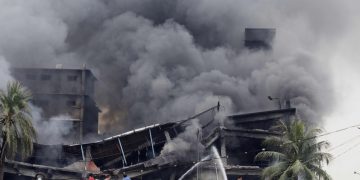 21 killed as explosion rips through garment factory in Bangladesh

21 killed as explosion rips through garment factory in Bangladesh Sept 10 (NIA) – At least 21 people were killed and several others injured when an explosion ripped through a garment factory, north of the Bangladeshi capital, Dhaka on Saturday, police said.

The explosion occurred when a boiler of the garment packaging factory exploded in the industrial rown of Tongi, 20 km from Dhaka, on Saturday morning.

The Dhaka Tribune reported that the bodies of 17 people were taken to the hospital while 30 burnt victims were rushed to Dhaka Medical College Hospital (DMCH). 10 more injured were rushed to the Kurmitola Hospital and a residential physician said the death toll was likely to increase.

At least 100 people were working in the morning shift when flames ripped through the four-storey factory during the fire.

A five-member probe body headed by Gazipur Executive Magistrate Rehanul Islam has been formed to look into the incident.

According to Aljazeera, a series of deadly incidents at Bangladeshi factories, including the 2013 Rana Plaza collapse that killed more than 1,100 people, have raised concern over safety standards in the South Asian country’s booming, 20 billion dollar garment industry.

Garments are a vital sector for Bangladesh and its low wages and duty-free access to Western markets have helped make it the world’s second-largest apparel exporter after China.