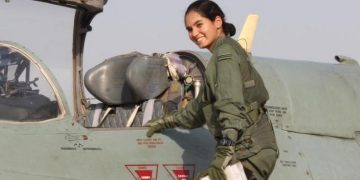 by Editor
in Around South Asia, Around The World, India, Top Story
Reading Time: 4 mins read
5 0 Avani became the first Indian woman to fly a fighter aircraft solo when she flew a MIG-21 Bison in her first solo flight from the Indian Air Force base in Jamnagar, Gujarat.

Avani, who hails from Rewa district in Madhya Pradesh, was declared as the first combat pilot along with two of her cohort, Mohana Singh, and Bhawana Kanth. The trio was inducted into the Indian Air Force fighter squadron on June 18, 2016.

They were formally commissioned by then Defense Minister Manohar Parrikar.

Mohana Singh and Bhawana have also completed training to fly a fighter plane and will soon fly fighter planes. All three were given training in January. All three are holders of university degrees in Engineering.

They were inducted into the fighter stream after basic training in June 2016 on “an experimental basis” for five years initially.

Here’s all you need to know about them:-

-She completed her training at Hyderabad Air Force Academy.

-She did her schooling from Deoland, a small town in Shahdol district of Madhya Pradesh.

-Completing her Bachelors in Technology from Banasthali University, Rajasthan in 2014, she passed the Indian Air Force exam.

-Chaturvedi is inspired by her brother who is in the Army.

-She always wanted to conquer the skies and hence joined the Flying Club in her college.

-Her father, Dinkar Chaturvedi, is an executive engineer in Water Resource Department of MP government and her mother is a home maker.

-Chaturvedi likes to play chess, table tennis and to do sketching, painting.

-Chaturvedi’s achievement has put India on the list of the countries such as Britain, the United States, Israel, and Pakistan, where women are allowed to fly fighter jets.

Asked about how does it feel being the first female fighter pilot, Flying Officer Avani told WION: “Machine doesn’t know your gender.  Be it a boy or a girl, you’ve to be competent, the Indian Air Force doesn’t discriminate. To make the 30 mins of sortie work you’ve to do a lot of groundwork, the contribution of the team that supports is immensely important.”

“I’ve done my schooling from a Hindi medium school. The journey of being a fighter pilot has been about a lot of learning. I’m still in the training phase of being an independent pilot,” Avani added.

-She hails from Darbhanga, Bihar and was born and brought up in Refinery Township, Begusarai.

-Her father is an engineer in IOCL and my mother is a homemaker.

-She has her schooling from Barauni Refinery DAV Public School and completed B.E. (Medical Electronics) from BMS College of Engineering, Bangalore.

-Photography, cooking, swimming and travelling are Kath’s other interests.

-She always wanted to fly like a free bird since her childhood which inspired her to join IAF.

-After clearing Stage I training, she got a golden opportunity to opt for fighter stream.

-Her father is currently serving in IAF and mother is a teacher by profession.

-She has done her schooling from Air Force School, New Delhi.

-Here other interests are travelling, photography and cooking.

-She wanted to carry on the family legacy by joining IAF.

-As a Flt Gunner in Aviation Research Centre, her grandfather used to go to different places, on various missions. Inspired by her grandfather, she always wanted to live the same life and . Flying was the best opportunity.

-She dreams of being part of the future combat missions and fight for the nation when duty calls for guarding the Nation’s skies.

-On night flying experience she says, ”It was new to me and it was the best thing that ever happened after coming to Kiran ac. I remember the small puffs of beautiful crackers bursting 1000’ below me on my first take off in night flying phase. The ones I used to gaze from below and was amazed at when I was a child.”

-”I was on my first Sector Solo Sortie by night on Kiran ac. While operating in a sector I witnessed some lightning close to me which frightened me for a moment. I immediately initiated rejoin and during descent I encountered clouds. I faced difficulty in discerning between the stars in the dark sky above and the small clusters of light on the dark ground beneath. Soon I realized that I was not able to maintain any connection between instruments and the visual indications of aircraft attitude.”

-”I recalled what my Instructor had taught me, ‘no unnecessary head movements, switch over to Instruments, Trust your Instruments’. These words echoed in my head, I disregarded the visual indications and continued descent to a lower altitude relying totally on instruments. Once visual with the ground, I got oriented and recovered the aircraft safely,” she said.
\
(The featured image at the top shows Flying Office Avani Chatruvedi)
SendShare2Tweet1ShareShare