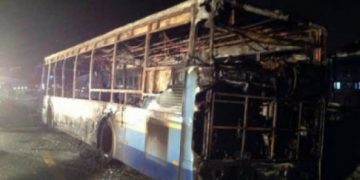 Colombo, Feb 21 (newsin.asia) – At least 19 people were injured and rushed to hospital after a passenger bus caught fire in Diyatalawa, in the Central Highlands of Sri Lanka on Wednesday, police said.

The bus had been heading to nearby Kahagolla, from the main Diyatalawa town when the bus suddenly caught fire.

Local media reports said those injured were mostly air force and army soldiers who had arrived from the northern town of Jaffna to the Diyatalawa military camp.

Among those injured was a woman. The injured had been rushed to the Diyatalawa state hospital.

Police said it had launched investigations. The cause of the fire was yet unknown.

(The above is a file pic)