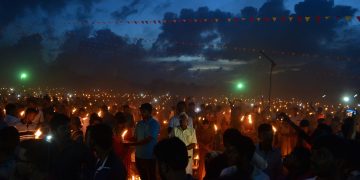 The conflict in Sri Lanka over the memorialization of Tamil Tiger militants through the annual observance of Maaveerar Naal or Great Heroes’ Day on November 27, is showing signs of fading. Paradoxically, these signs appeared during this year’s observances which saw unprecedented public participation in the Tamil-majority Northern Province, writes P.K.Balachandran in South Asian Monitor.

Even as thousands of Tamils thronged public places where rituals were performed for the 35, 000 dead of the now defunct militant group, the Liberation Tigers of Tamil Eelam (LTTE), there were signs from the Sri Lankan government as well as the Tamil side, that memorialization of the LTTE dead may get routinized, moderated, normalized and tolerated over time.

This augurs well for ethnic reconciliation which is the ultimate aim of the Sri Lankan state as well as the minority Tamils following the failure of the armed struggle for a separate Tamil Eelam.

For the first time since the comprehensive defeat of the LTTE in May 2009, the Sri Lankan government this year officially allowed memorialization observances to take place, even though high public participation was expected given the resurgence of agitation-politics in the Northern Province following the failure of the government and Tamil parliamentarians to address the multifarious and accumulated grievances of the Tamils even eight years after the guns went silent.

True, the junior Minister of Defense, Ruwan Wijewardene, warned through the state-owned Daily News, that it was illegal to commemorate the dead of the banned LTTE and that the police were identifying participants for arrest and prosecution. But the Chief Minister of the Northern Province, C. V. Wigneswaran, lost no time in allaying fears of arrest with a statement saying that a government which had permitted the observances cannot and will not arrest participants.

He appealed to the Tamils to understand that Minister Wijewardene had to threaten to arrest participants in order to placate the Sinhalese majority in South Sri Lanka, the political constituency all Sinhalese leaders have to address.

Wigneswaran then went on to cite another example of how Sinhalese politicians, who are friendly to the Tamils, have made similar statements only to smother criticism in their principal constituency, the Sinhalese majority. President Maithripala Sirisena, he said, is a good and well-meaning Sinhalese leader wanting to address the grievances of the Tamils, but he too had to repeatedly and publicly assure the majority Sinhalese that he would not allow Sri Lankan soldiers (“war heroes” in the eyes of the majority community) to be hauled up before an international court for “war crimes” allegedly committed against the Tamils. These assurances are being given though the government is officially committed to the UN to set up accountability mechanisms.

On Maveerar Naal this year, even as people congregated in public places in large numbers the Sri Lankan army remained confined to the barracks and the police controlled traffic instead of preventing people from indulging in public grieving.  Propaganda songs of the LLTE-era were brazenly played over loudspeakers and posters bearing pictures of the LTTE Supremo Velupillai Prabhakaranwere put up in some places. Red and White colored flags of the Tamils, popularized by the LTTE, were hoisted everywhere. Churches and Hindu temples performed memorial rites without let or hindrance.

But this was not the case before. After the war ended with the annihilation of the LTTE’s military machine and the North and the East of Sri Lanka in May 2009, observances of the Maaverar Naal, begun by the LTTE in 1989, ceased, because the government would not countenance them.

The government razed the LTTE’s memorials, monuments, offices and graveyards to the ground. Prabhakaran’s underground house, which became a tourist attraction for a while, was dynamited. The State did not want any symbolic rallying point for a revival of the Tiger cult.

A psychological variant of the systematic destruction of the vestiges of the separatist armed struggle was the “rehabilitation” of 12, 000 captured or surrendered LTTE cadres. The year-long rehabilitation process was meant to cleanse the minds of the cadres of all anti-Sri Lankan and ant-Sinhalese thoughts instilled by the LTTE.

In these circumstances, and given close army surveillance, only the boldest among the Tamils (like the students of Jaffna University) would observe MaaveerarNaal.

However, with the coming into power of Mithripala Sirisena as President and Ranil Wickremesinghe as Prime Minister in January 2015 with the en masse electoral support of the Northern Tamils, police surveillance decreased and people were allowed to express their grievances, and memorialize their dead, individually first and collectively later.

In the meanwhile, the Tamil people had seen the need for expressing themselves politically in a strong manner by organizing rallies and demonstrations. The slow pace of political reforms and the government’s foot dragging on addressing war time accountability issues had driven them to think of a forceful exposition of their grievances and demands.

Constitutional reforms to address the Tamils’ demand for provincial autonomy had virtually come to a halt. The powers-that-be in Colombo did not want to provoke opposition of the majority Sinhalese community. The promised judicial mechanism to ensure war time accountability was not set up. The Office of Missing Persons, though announced, was also not set up. Much civilian land was still in the hands of the armed forces. And the draconian Prevention of Terrorism Act was not replaced. At the international level, the UN Human Rights Council (UNHRC) kept giving the government more and more time instead of getting it to implement its resolutions which were, ironically, co-sponsored by the Sri Lankan government.

As Northern Chief Minister C. V. Wigneswaran put it in his message on this year’s Maaveerar Naal, the Tamil people were getting increasingly restive and itching to show “commitment” to their cause and also their “collective power”.

They also wanted to warn Tamil politicians in parliament that they should not abandon the cause of provincial autonomy and meekly accept the crumbs thrown to them by the powers-that-be in Colombo.

But being a “Good Governance” government and having won the 2015 Presidential election with the en masse support of the Tamils, the Establishment in Colombo allowed observance Maaveerar Naal this year.

Indications are that the Maaveerar Naal would be allowed in the coming years too. The rituals and other observances, conducted peacefully like this year, might get routinized and lose their cutting edge over time. The Sinhalese majority could get used to it and take it in their stride as another Tamil ritual. And when it does become routinized and gets generally accepted, Maaveerar Naal could pave the way to ethnic reconciliation.